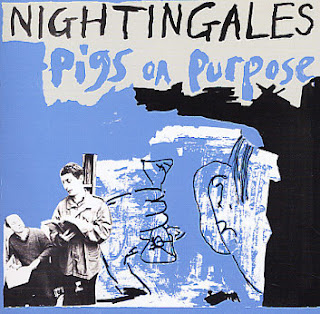 Wow! How good is this classic debut album from The Nightingales. Its got the lot; cheap sounding weedy guitars played with amphetamine fueled  strumming, repetitive bass-lines, busy speedy drumming, intelligent and funny lyrics delivered amateurishly by that weird 'bloke next door' himself Robert Lloyd.
I remember "The Crunch(12" version)" being played in my local Goth club circa '83, and the dance floor was full of black clad whirling dervishes; I wish one had a smart phone back in those days!?....then it was back to The Sisters of Mercy and Alien Sex Fiend, and things calmed down(Yawn!).

The Nightingales also released a string of singles to rival The Buzzcocks on Cherry Red/Rough Trade/ and their own Vindaloo records.
Starting with.....: 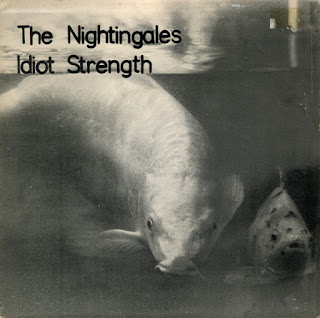 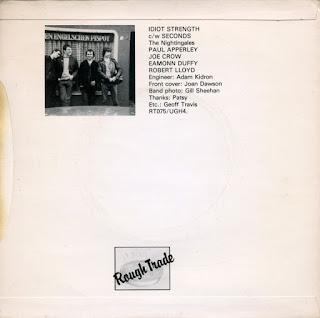 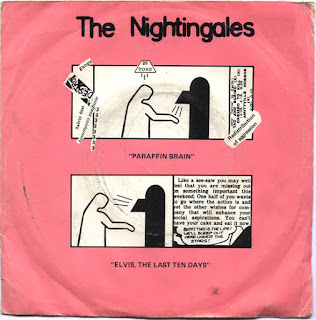 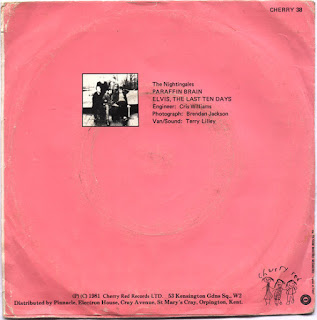 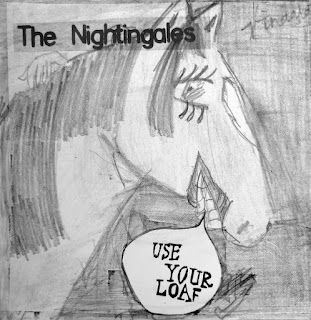 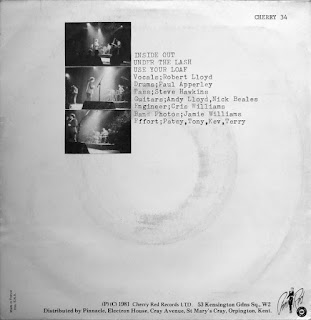 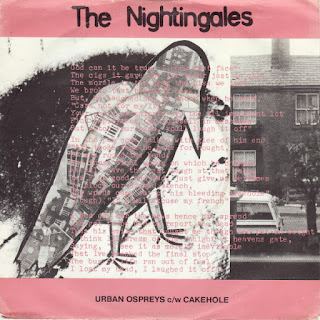 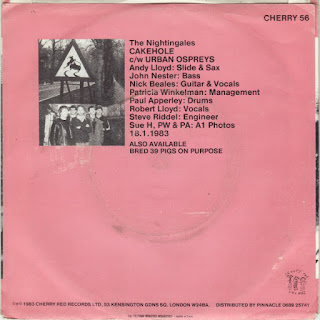 All these frankly Brilliant singles are,of course included in the file ,with just one flick of the trigger finger.
If there is a stand out single from this repertoire,then it has to be "Paraffin Brain" and, the fantastically titled, "Elvis, The Last Ten Days". I have restless nights worrying whether this work of genius actually made it to number one in at least one of the infinite number of universes that theoretically populate the wider cosmos. If there was actually a reason for the existence of the multi-verse (which of course there isn't!) then this single would be it......but then of course there would be a universe where 'One Direction' got to number one and have utter awfulness like The X-Factor,Rap Music and U2.....SHIT!...its this universe isn't it!!!!!????...FUCK IT!

DOWNLOAD all this classic anti-pop on purpose HERE!
Posted by Jonny Zchivago at 12:00

Have to agree...this is the universe where ©rap (the © is silent) and U2 get number 1's...and that sucks hard. So much great music out there that goes by the wayside because corp. muzak pushes pablum over the airwaves 24/7/365...

I will say though, that U2 put on an awesome show for their "Boy" tour, and weren't too bad on the "October" tour, though Bono was already having trouble hitting the high notes by that time. Then most everything after the "Pride" single was dreck.

Always the showman is Bono.....always thought he was a twat as soon as i first saw him wearing pixie boots and standing on the monitors on the Old Grey whistle test....and he's still here!!!! With sunglasses permanently super glued to his gnome-like features.
I can see the appeal of the early U2 however, even though not for these ears or eyes.
They also represent the solitary blot on Eno's CV.

Alas you've forgotten a much worse blot. Eno recorded the U2 light tribute band. Unless perhaps you're a fan of Coldplay Jonny.

Thank you so much for these Nightingales records, Comrade Zchivago!

Off topic maybe, but I can never pass the chance to join a U2 slagging and curiously, I have the exact same memory of Bono on the OGWT in his ridiculous pixie boots and shades, posturing on the monitors - even though I was probably only 12 or 13 and relatively unenlightened - I still knew a complete and utter wanker when I saw one.

Of course there is always the exception that proves the rule - I do remember liking their I Will Follow single - showing even the most overrated and pompous band in the entire world will have at least one track that doesn't send you into immediate existential despair at the idea of sharing the same universe with Bono, The Edge and erm... the other talentless muppets.

The only truly sublime 'release' by U2 was the Negativland detournement of 'I've Still Not Found What I'm Looking For' - I highly recommend the Craig Baldwin documentary Sonic Outlaws on the band that includes interviews with members of U2 as they squirm and try and apologise for the fact their record company went after Negativland with their copyright cops for every penny they had (at a time when U2 were trying to project themselves as sampler savvy techno-utopians) Craig Baldwin has also directed some great films like Tribulation 99, Mock Up On Mu and Specters of the Spectrum.
While looking to see if Sonic Outlaws was avaliable on YouTube:

I discovered that Negativland had released the multitrack of the U2 single as a digital download a couple of years ago but sadly the link on their site is dead - so in the highly unlikely event anyone has it, a working pink would be splendid