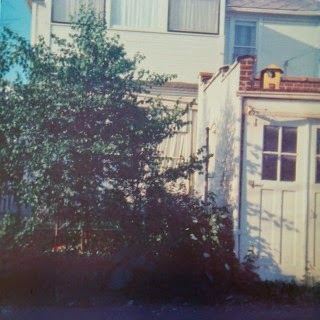 After a spate of uncharacteristically revealing album covers, Jandek hides again. Colour photo of the back of a house in bright daylight. Several windows are visible and the curtains on all of them are of course drawn tight. There is a brick garage behind the house with a yellow birdhouse (?) on top of it. It’s conceivably the same house as on the cover of You Walk Alone; white colour and width of siding match, but there’s no way to be sure. It’s definitely not the house from Telegraph Melts though; the garage doesn’t match.
The most “pure” Jandek album since Blue Corpse — rock and/or blues overtones are basically absent. All-acoustic, one guitar only, no drums, three to four minute songs. A heavy-handed echo effect surrounds the guitar on some of side two. Mood is thorny, ambivalent, a little impersonal, serious but not depressed like Blue Corpse.  Stylistically, it resembles the CD’s that follow, not the LP’s that came before.
Although I dread to think what the track "White Knob" is about!?