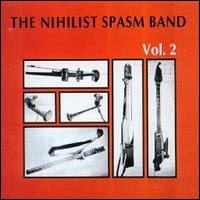 The 'difficult second album' is always an incredibly unfunny phrase used in boring, clichéd "rock band" talk. The ten year wait, if anybody was waiting(?), for The Nihilist Spasm Bands follow up to "No record", was, if anything, 'less' 'difficult to listen to, if 'difficult' to produce.
The concept remains the same, basically a free for all on homemade instruments, as do the politics, if politics exists in a Nihilist utopia? Just say 'No' kids.
The tracks mostly start off as a kind of a Free Rap manifesto, berating Canada and Stupidity. Then they start to disintegrate into something like a Recording of the Sooty Show fed through a scrambling device (mmmm, come to think of it, I'd quite like to hear that!). And,what is that thing that sounds uncannily like Sweep, the dog from the aforementioned 'Sooty Show',losing his temper?
This is Nihilism in practice, rules are for fools, and police yourselves please.


DOWNLOAD and play it with some volume too HERE!
Posted by Jonny Zchivago at 11:21