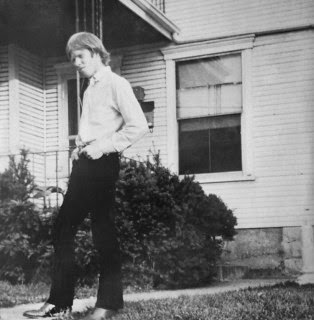 As accessible Jandek albums go, this is too accessible! This one really does sound like someone with no musical ability trying to make a blues rock album. Like a bunch of  1970's Teenagers locked in a room with some instruments trying to play the blues. A bit like The Shaggs second album, after they had lost that unique style of song construction through innocence, before their Dad thought they could make some money by making more proper songs.
Dunno if Jandeks father ever existed, but if he did , and advised his son to make some 'Hits', this is what it would sound like.It seems that Jandek doesn't want to walk alone after all?
Lyrically and vocally, its still the same old Jandek, so its not all bad; as is the  music therapy Beefheartian drumming. Its just the conventional sounding songcraft, the tunefull guitar, and there even appears to be a few melodies lurking menacingly.
Don't get me wrong, this would still have your nearest normal screaming for you to turn it off.

So on one hand you compare Jandek's most dissonant material with highly regarded musicians like Arto Lindsay and Lee Renaldo and then when he makes an album that has tighter playing than many punk bands and is certainly more traditional than a lot of the music by the aforementioned guitarists, it's considered as having no musical ability whatsoever? So it's both too conventional and also too devoid of musical ability and all of this adds up to mean.......? Do you actually see some sort of sensible logic path in that? It sure whizzes the fuck past me!