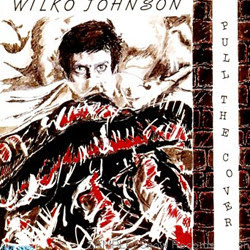 By 1984 Wilko was persona non grata, except in France. Our Gallic Garlic munching cousins are very loyal when it comes to artists of any kind. When they like you, they LIKE you......forever!
Not that their taste is anything but terrible however!
Wilko is an exception, among the pantheon of Anglo-American gods who still rule the supermarket muzak system. I don't think i've ever entered a French supermarché without having The Police, Phil Collins or Supertramp inflicted upon my shell-likes. Then there's the legions of Tarte aux Pommes craving Hippies who constantly bang on about Zer Doorssss ,Dip Purpul, and Zer Tens Years Hafter! Naturally ,Pub Legends, Dire Straits reign supreme in any Frenchmans cd rack.
Alas,our cute little B.O. ridden chums do have a predilection for good back to basics unpretentious Rock'n'Roll like Dr. Feelgood. So Wilko is guaranteed a career in the land of Circus Clowns,swarthy males pissing in plain view,and vastly over-rated cuisine,yes,  France; for life! (what there is left of it of course) .
After John Wilkinson's short tenure with Ian Dury as a Blockhead came to an end after the 'Laughter' album. There was always gonna be a place for him on a French Record Label, hence this Mini-Album. Adorned with a tasteful drawing of our Wilko in Bed!!!.....I can't imagine our hero ever going to bed, nevermind pulling the covers over his face!? I suppose the title is a reference to the 10 cover songs that appear on this disc rather than Monsieur Johnson's nocturnal habits.
Obviously playing with the Blockheads severely curtailed W.J's songwriting activities somewhat?
Nonetheless, its still prime Wilko.

I'll give the French a little more credit for their taste than our illustrious blog host: let's remember they gave a good home to countless American jazz musicians--very, very good ones--in the 1960s. Dexter Gordon, Eric Dolphy, Archie Shepp, to name but three. That loyalty of which you speak allowed these musicians to make a great living in a country the size of Texas, where in the whole of the U.S. they had a tough time to eek out a living of an sort unless they were named Miles Davis. I'll salute the French for that. Not much else, perhaps, but for that, absolutely.

Oh the post? Much thanks. I'd no idea of this release by the master from Canvey Island.

You are of course correct. France saved Free Jazz for the masses......they do owe us for saving them from the Nazi's i suppose?

Yes, I like to think the Allied Forces are owed gratitude. Though truth be told it might be Adolph himself who can be thanked, for going after Russia when he didn't need to and losing the Battle of the Bulge as a result. But we digress.

I attended a VE day ceremony in my French village 'what i live in'. And the mayor specifically thanked me as a representative of 'les anglo-saxons' for the sacrifices we made during WW2.....i said it wasn't necessary, as I didn't do it myself.....but in hindsight I would now like to take the credit for defeating Hitler in Europe. Get down on your knees europe and grovel!

Except that back in 1939, an unsavoury character gave all our defense system away to you real Saxon cousins (the Germans), .../...one could argue that the Russians really saved us because they fiercely fought on the other front and the terrible loss of life was...terrible...on another note, we may have had some terrible singers through the years, but we never gave birth to any such dross as Kajagoogoo, kiki dee, Boy Gorge, Queen or Duran duran. As for supermarket i agree, it is basically

...modern mind control techniques aimed at hypnotising shoppers, manipulating them to buy in excess. I m no big fan of the skydog label but at the time, as u pointed out, no one in the UK was interested in Wilko. I saw him live many times and always enjoyed myself very much. I saw heaps of English or US acts who, for some would've been rotting in some dingy pub or bar back home if it weren't for some music lover/promoter who had

The idea to organise small tours in France, Spain, Germany or The Netherlands. Although Albion brought us some very good stuff, i've always been sad to see that real geniuses are often ignored or misunderstood. The list is long. Allez gros, sans rancune.

Ah yes the maginot line,that rigid unflexible defense network that stopped at belgium....the height of silliness.
The russians won the war but us lovely anglais-saxons liberated you poor chaps.I doubt you lot would have bothered the other way round.
Kajagoogoo etc are dross,but you've heard of them, unlike the legions of dross eminating from the wider continent.

at this time Marc Zermati was the boss of the label SKYDOG...a famous punk rock label...e manage also the clash, johnny thunders alan vega and many more