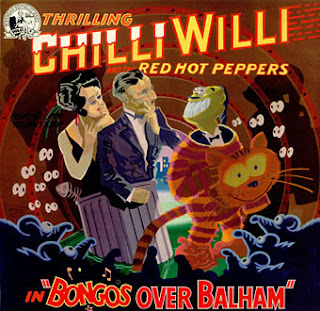 What are the odds that two bands can exist with the words Chilli, Red, Hot, and Peppers in their group moniker, and both be so skin crawlingly awful?
This outing by Snakefinger's Pub Rock group isn't as terrible as the debut, less countrified with a hint of something more rocky.....just a hint mind!
They are  now a group, having recruited other musicians, including one Pete Thomas; soon to be one of Elvis Costello's Attractions.
Snakefingers distinctive guitar style can be heard all over this one, which would find a natural home on the Residents classic pre 1983 records.

DOWNLOAD some hillbilly music from Balham HERE!
Posted by Jonny Zchivago at 09:26

"What are the odds that two bands can exist with the words Chilli, Red, Hot, and Peppers in their group moniker, and both be so skin crawlingly awful?"

Earl RHCP isn't awful. Later, completely Middle Of The Road, Red Hot Chili Peppers, is cringingly mortgage-paying water-treading.
You didn't see their highly-creative 90s-early-2000s Guitarist John Frusciante doing that. He went so far with them, but went off to do drugs (bad) and make a LOAD of his own material for the sake of doing his own thing (good).

Please don't be naive about the quality of some of the RHCP output. It's pretty damned fine music, the stuff they made in Houdini's mansion.
They even made a 57-minute long black-and-white documentary about it called 'Funky Monks'. You can get an idea of the creativity that way... such a quality cannot be faked.
Faking interest is what they appear to be into doing these days for some number of albums now... much like Metallica.
The money-men get a grip of the artists and they become women-serving money-factories, (with some caveats, all due respect given).

But Blood Sugar Sex Magik is pretty much the sound of freedom and funkiness. That never gets old. Humanity always needs that, especially today with fascism rising again and technology giving people self-chosen (yet still manipulated) tunnel vision. Blinkers. Like on a working horse (who is also a slave, yet knows it, thus is superior to the human who doesn't yet realise his predicament).
Music is a big part of the solution to freeing minds. Ask (or just listen-to) George Clinton.
The RHCPs were into that, once upon a time. It should be remembered...
Peace.