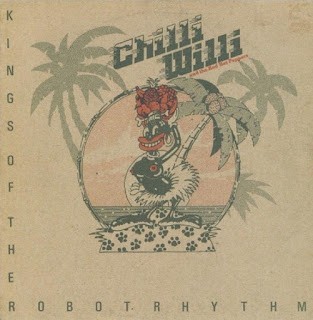 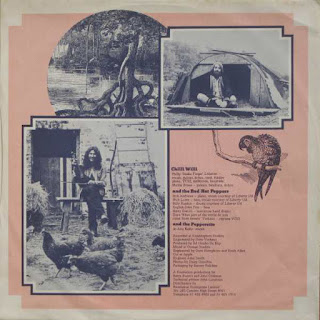 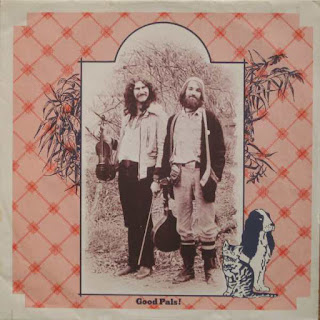 From its slightly racist cover, to the unpleasant hippie photo's on the inner, this music makes me wanna puke! .....but......it bizarrely has a Residents connection in the form of Phillip "Snakefinger" Lithman, who was one of those dirty hippies featured in the photos herein!
After hanging round with the Residents in Frisco, Phillip returned to the UK in time for the early Pub Rock scene ,and formed Chilli Willi and the Red Hot Chilli Peppers as a duo, with another hippie. At this time Pub Rock was primarily concerned with trying to be an american redneck, this didn't exist in the UK, as an alternative to the topographic oceans of Prog Rock that were prevalent at the time. After listening to this I was sent scrambling for my copy of "Tales of Topographic Oceans" by Yes, it was that shit! The ironic thing is that this stuff is just as 'muso*' (*a derogatory term for a technically gifted and terminally boring Musician) , as a Rick Wakeman concept album, but less authentic. At least Rick was being himself. Country music is and has always been a crime against Culture, up there with the destruction of Palmyra in Syria.
This casts an uncomfortable shadow over who or what the Residents were in 1971!?
I remember Bill Drummond recounting seeing the Residents 'Mole Show' and spying a tuft of long thick curly hair protruding from the base of the eyeball mask of a Resident. This, quite rightly, destroyed his admiration of said group somewhat. I'm not quite that fickle, but it does take the shine off their peerless work up to that mole show watershed in the Residents career.
Thankfully Pub Rock got a bit more mean and exciting in the years after this, with the rejection of this Bluegrass nonsense and a return to some balls to the wall R'n'R!
Then Snakefinger cut his hair ,shaved off that moustache, and help create some of the most bizarre pop music ever made.

DOWNLOAD this to the Hague for crimes against humanity HERE!
Posted by Jonny Zchivago at 10:06

Hi! according to what I eared, the mole show tour was the first formula without the formant members. Holy shit! It was just an employee with long hairs... your friend could still love them!
I saw them with Snakefinger in Belgium with the 13th anniversary tour, first tour with one skull instead of an eyeball, last tour with Snakefinger!
We were completely in the myth but understood there was sometimes girls under eyeballs, that it was a theater of a group instead of a group!

Yes, it never occurred to me that the Residents could be anything other than perfect individuals, and there were four of them in my mind....even though i now know they were mainly just two persons for most of their career.
This is music without the suffocating effect of the cult of personality.
The Residents have the best chance of continuing into the 22nd century out of any group...even Dr. Feelgood and Fairport Convention.

I've seen the Residents Mole Show and 13th. I've seen Snakefinger's band multiple times. I'll take this over anything post Duck Stab Residents any day. Also, you're lineage is wrong. Snakefinger went to CA after Chilli Willi. Typically French ( or Belgie, or what ever cheese eating Euro thing you are) that you slag it off, then post it anyway. Wanker. Go lick Muzzie ass.

Anyone would think you were snakefinger's ghost!
Muzzie Ass?....I take it you mean Muslims? What a special piece of pond life you are.
I think you'll also find that philip went to CA after the first Chilli Willi LP, then returned later for more Chilli Willi LP's.....so get yer facts right before slagging my pro-european ways you hideous racist CUNT.
I like you really.