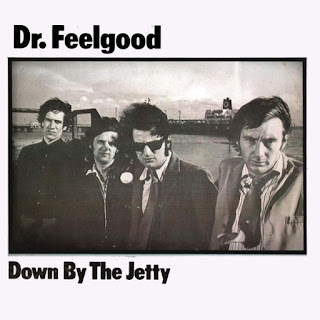 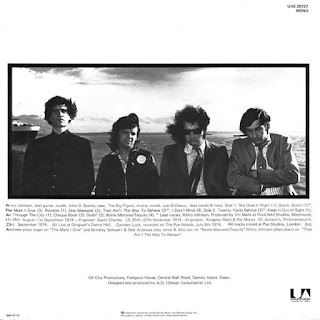 One can forget how shocking this album and group were in the mid seventies, where ELP and Yes ruled the lumpen masses.
Stripped down bare bones rock'n'roll,short songs, not a single cape in sight, and all in glorious MONO!
Yep, no Quadrophonic concept albums for Dr. Feelgood, and they dressed like the actors from classic UK TV crime drama "The Sweeney". Ones' favourite lines from which were; "Get yer trousers on son, you're NICKED!"; and a close second was "We're the Sweeney Son; and we 'aven't 'ad any dinner. So unless you want a kicking, you tell us where those photo's are!?"
In my fantasy-world this is how Dr Feelgood spoke, at least when in character. Even though I now know that Lee Brilleaux was the consummate gentleman, despite being constantly drunk. "Always keep one drink ahead of the hangover" was Lee's unwise advice.
The first album was a mix of the timelessly classic Wilko Johnson penned numbers , like "Roxette" "She Does It Right" among a couple of others, and the kind of crowd pleasing R'n'R classics that you'd expect a cruise ship club band to churn out.
Tunes like "Keep It Outta Sight" have that quality that suggests it had always existed before Wilko wrote it? Plucked out of the ether ready formed like an apple from the tree of rock'n'roll knowledge.
The anti-ELP.

DOWNLOAD by the jetty HERE!
Posted by Jonny Zchivago at 12:26

Clinton Heylin's book "Babylon's Burning" described how "Down By The Jetty" reached receptive ears in the US: the Ramones loved it, Chris Stein from Blondie spun it at CBGB's, Miriam Linna and others in Cleveland had it. Feelgood gigs were attended by John Lydon, Jah Wobble, and Glen Matlock before the Pistols formed. Graham Parker and Joe Strummer were inspired to start bands after seeing the Feelgoods. Paul Weller dug their suits as well as their sound.

As you say, it's easy to forget that they were a shocking contrast in sound and image to the prevailing bands of the day. They weren't the first pub rock band, but perhaps the most minimalistic and energetic. Andy Gill (whose playing style owes a lot to Wilko) said there was a "barely suppressed violence" in the Feelgoods' stage presence. Like those detectives in The Sweeney!

"Stupidity" is a fantastic live album, and the recent collection of the Feelgoods' BBC sessions is great stuff too.

Mmmm, I wasn't going to post "Stupidity", but maybe i will now you said its fantastic.
yes i agree, they were as important an influence on the UK punks as were the Ramones.

Yes, the Feelgoods were "holding the line against a parade of ghastly prog rockers", to quote Allan Jones. Mr. Jones went so far as to say English punk would not have happened without them, as jonder's post attests.

According to Jones, their manager kept a voluminously annotated binder that detailed all the pubs (and their respective brews on offer) they'd encountered, so they could carefully plan their routes between gigs. Said routes were scheduled with extra hours for "jolly ups" in said pubs, to assure copious quaffing ('cept for Wilko of course) could be accomplished and they could still get to the gig on time. Hooray for heroes.