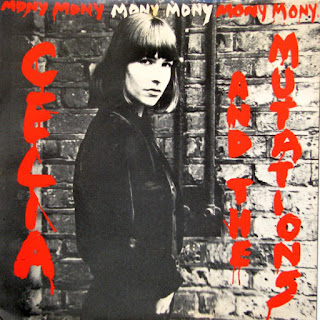 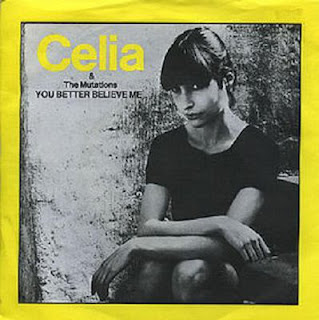 In 1977 Hugh Cornwell found some Posh Totty to put on the casting couch, and the resulting birth  was a single on which  said Posh bird was backed up by the Stranglers in a clandestine attempt to make a New Wave cash in 'Hit'.
Of course it failed, but this didn't stop JJ resurrecting the idea with a second.....yes, i said second, single!?
This one was a lot better, mainly because it had the Pub Rock dream team of JJ Burnel and Wilko Johnson backing up the aforementioned Posh Totty. They even wrote a new tune for her, "you Better Believe Me"......its true!
All four tracks have the magnificent JJ Burnel Bass sound, but once we lose the plodding Jet Black Drumming, and Cornwells anemic guitar. Bring in Wilko's choppy Tele, ably backed up by one time Rockpile stickman Terry Williams ; we get something verging on the very good.
The identity of Celia Gollin herself has always been mysterious. She did some vocals on a Gavin Bryars Album on Eno's Obscure label in 1975, but after that nothing. Could she have been the 'Duchess' that Cornwell wrote about on the stranglers hit? Sometimes she even sounds a bit like Hazel O'Conner(also a Cornwell girlfriend) on these tracks.....maybe, the cover photo was just a model, and Hazel did the singing.....my mony mony's on that.

Boring gossip aside........Wilko and JJ would probably appear in my Fantasy Pub Rock sooper groop.
Maybe add Ian Dury on Vocals and Lyrics, Pete Thomas (of the Attractions) on proper Drums, and Lew Lewis on Harp. I did toy with having Philthy Phil 'The Animal' Taylor on drums, but went for the musicianly angle rather than looking good.........and that's my Pub Rock Sooper Groop.

Please feel free to volunteer your own Fantasy Sooper Groop of any genre in the comments section below for some nerdy amusement.

They couldn't come up with anything more trite and over-used than "Mony Mony", hmm? There must be an outtake of "The Locomotion" collecting dust in the vault somewhere too.

Yes, I would have to recruit Davy Payne into my line-up also, breaking the no more than five persons in a group rule of Rock.

Good single, that second one. Someone was insisting in some or other comments thread I read on youtube that the backing band was JJ w/ Dave Cook + Gary Thompson, borrowed from the Southend-On-Sea band 'Tonight' (who recorded the single 'The Drummer man'). Apparently Dave Cook was a bit of a Wilko acolyte who also played a telecaster. I'm not sure where they got that idea though. Discogs entries are quite clear that it's Burnel/Johnson/Williams..?