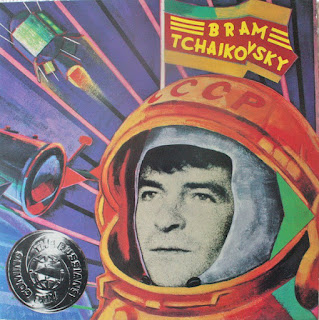 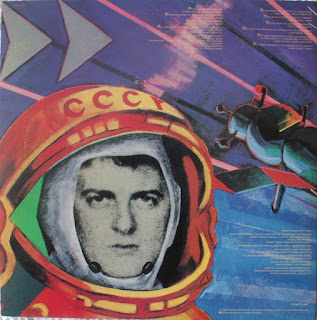 Wow! A gatefold sleeve! Someone was expecting sucess!?
Of course it never happened, and it was just a matter of time before  ex-Motor Bram and the chaps resided in the 'Where are they now?' file alongside The Thamesmen* (*Spinal Tap reference).
This album is just the same as the first album, but with slightly weaker songs and better production values, thanks to the minor hit single in the USA.
It was also renamed "Pressure",with different artwork, in the States, the land of 'free speech', because of the communist references!? I'm sure there was gonna be a revolution once the American Youth had a butchers (Butchers Hook = look) at Bram Tchaikovsky's new album.
What are they so afraid of?....still to this day, even the Russians are making a comeback in the US Fear charts. And that's the only chart Bram managed to get a hit in this time around.

The Russians are DOWNLOADing HERE!
Posted by Jonny Zchivago at 10:10

The one minor hit notwithstanding, I always felt BT was simply "too English" for the American market. Alongside the Only Ones, the Jam, the Stranglers, Graham Parker and Paul Weller to varying degrees. Elvis Costello had enough melody and deep enough songwriting chops, and the Clash had the guts, power and charisma to break over here. But sadly a lot of strong English talent just didn't across. Fabulous Poodles being another. Such is fate.

How to break America was always a mystery for UK artists....mainly its simple...You have to be a people pleaser, have no message and (most importantly)become shite.There are exceptions to these rules of course,but first album Clash would never have seen them snuggling in to FM radio between Led Zep and Motly Crue,so they had to become american. Elvis Costello always had an american slant,and he looked like Buddy Holly.Its very different now,as the US are a lot more exposed to Brits on tv and film so they understand it all a bit more.
BT was somewhat English, but he didn't even break the UK, nevermind the USA....maybe he seemed too american?....Fabulous Poodes will appear soon by the way; they also never broke the UK...in fact in your short list only The Jam and (to a lesser extent)The Stranglers could be said to have broke big in their own country.

Robbie Williams had no message and was certainly shite, and he couldn't get across either. Maybe it's just territorial: we only want homegrown awfulness.

Robbie Williams did have a message.
Mainly that Pop is Dead, and so should be the human race.
On behalf of the UK we apologise to the world for this idiot.

I wish the US would keep its home grown (groan) awfulness, but she exports its as ruthlessly as she does her version of 'freedom' and 'democracy' (choke)!
Please can one of your famous redneck NRA members please kill Kanye West, Jay Zee, in fact all of those Rapping R'n'B cunts!.....we'll kill Mumford and Sons,and all Simon Cowell related pop puppets in exchange.