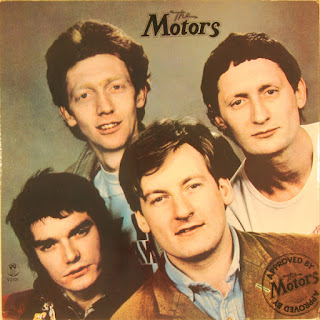 Oh how we laughed when we heard 'Airport'. We used to sing 'Airport' in maths class at school to amuse ourselves and also annoy the authorities of course. Dexy's 'Geno' was another favourite a year or so later I remember.
The first album was a forceful singalong classic,packed full of strong tunes.
The follow up was a mash up of lightweight pop tunes, varying in styles from Synth Pop, to some perverted chart orientated version of Neu, to Power poop.In places they seem to have changed from the New-Wave Status Quo into the New Wave Wings.
'You Beat The Hell Outta Me' seems to be a refugee from the debut LP,and is uncomfortably out of place.
As terrible I thought this group and album were back in 1978, I now find myself really enjoying its diluted nu-wave lite formula.
Yes they got one 'hit', but it was also a lesson in how to commit career suicide.

DOWNLOAD disapproved of by my peers HERE!
Posted by Jonny Zchivago at 22:48

Hearty thanks from the U.S. for all the pub rock. What's next, Mickey Jupp then? Stupid me: I loved the Motors' first one, and bought the second based on hearing "You Beat the Hell Outta Me". Ha, fooled by the one rocker hiding amidst the silliness that is the rest of that awful record.

Hello Ian,
yes, of course Jupp will appear here soon,just have to finish off the Ducks Deluxe connections before i move on.So we're taking Tyla Gang, Bram tchikovsy, next.I won't bother with the third Motors album,which is even worse.
What was going through their (The Motors) minds when they made this record i wouldn't know...in fact yes i do....Mr Record company man wants sales.A familiar story.

I was 13 when this came out and bought it based on seeing them play "Airport" on Top of The Pops (Oh, gimme a break, I was 13 ferchrissakes!). The album had been re-issued in a different cover to the one you have here as the record company thought the band looked too old and ugly on the original. Ha, they got that right, then.

Yeah,the Motors are probably in the top ten ugliest bands. They were pictured in the distance on the first album, then some idiot at Virgin thought it'd be a good idea to have a close up......sales plummeted.

Just had a look at the "Airport" video on YouTube. Um, wow. Flashpots! Nick's rockin' dad man-spreading: "Let's get this over lads, I've a garden shed to paint!" A Spinal Tap outtake that's regrettably all too real.

Mmmm yes....this is why they were a joke at school. The vid from Top Of The Pops is amusing too. Andy McMaster is the only one not in aviation gear, and there's a moment when he glares over his shoulder at Garvey and Tchaikovsky, who are not taking it seriously enough.
BT is notable by his absence on the other video's....he must have jumped without a parachute after "Airport" ruined his rock cred.

I knew them only from the local alternative radio station in Washington, DC. It played "Forget About You" and "Soul Redeemer." I thought they were a first-rate power pop band with a big Motown influence. Had no idea they even had punk roots till a while later.

What threw me was the next album, where they sounded like 10cc. I'll take the Motown power pop, thanks.