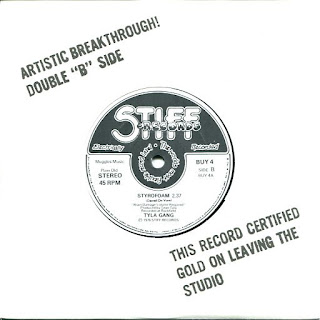 In 1976, the year Punk Rock exploded onto the front page of the tabloid press, there were NO,Zero, records of said hyped genre. Not surprising as there were hardly any 'Punk' bands to make any singles. So we were told who was Punk,and generally they weren't actually.
Stiff provided some 'real punk' with the Damned's 'New Rose' and a licenced Richard Hell single.The Sex Pistols' "Anarchy" was released by EMI, and there were imports of American Glam like The New York Dolls and The Stooges.
There were records by Eddie and the Hot Rods, who were fast enough but looked like a charity shop Bay City rollers. So,in '76 all the kids had to go on were these, some reggae, and Pub Rockers marketed as a bit punky.
One of these would have been the Tyla Gang's first single on Stiff. A typical slice of American flavoured Bluesy Rock, sung in a Faux-american accent. Definitely Not Punk.

This demands a spot of auto-plagiarism (always wanted to use that word).
I wrote the following synopsis, which I will entitle "Punk Never Happened, like." , in the comments section of The Motors first LP post......which no-one reads I guess.
So i'll quote myself, in an exercise of narcissistic glee,and reproduce it below,as it explains the situation in 76/77 very nicely:

"When one looks back at the 'Punk' era, what is remarkable is the actual lack of Punk Bands...so naturally we had to cast our nets wide and bands like The Motors and Motorhead got roped in.With the advent of Punk Revisionism, it is now apparent that there were actually NO Punk bands during the punk years. The Ramones etc were Proto-Punk, Buzzcocks Power Pop, Stranglers Pub Rock, Television retro proto-post punk, the Jam proto Mod revival, 999/Vibrators Bandwagon Punk, Siouxsie and the Banshees Post Punk/proto Goth,Subway Sect proto-indie, Clash/Damned Pub Rock refugees,Patti Smith,Hippie, and even The Sex Pistols were made up of Prog/Glam/Pub rockers molded into an art object by art school svengali Maclaren......who always referred to it all as 'New Wave'. So Punk didn't actually exist outside the minds of the sensationalist media.....discuss." (J.Zchivago, 5/9/2016)

DOWNLOAD this '76 punk' single HERE!
Posted by Jonny Zchivago at 07:59

Kind of all comes down to fashion, doesn't it? How you look determines what you're labeled. Put the band in bondage pants, ripped T's and spiky haircuts and the Slayed? album could easily be tossed in the Punk bin. Pen a standard-issue pop song but deliver it in pan makeup and black lipstick and you're Goth.

We've all seen the old shots of the Stranglers with Dave Greenfield in his flares and chunky heeled platform shoes. Oh wait, they're calling us Punk? Let's go get the skinny jeans then.

Still doing it here in the States: blare your tinny, shrill pop song, but do so wearing a black 10-gallon hat and and you're magically Country.

I suppose we didn't get any 'Punk' bands until we got the stereotype groups like the terrible Exploited, GBH and stuff like that. Leather biker jackets, mohawks, jeans and boots.Playing fast Discharge inspired one chord dirges. That's a 'punk' band. Shit, but it ticks all the boxes.
So maybe Punk did happen after all, but not in a punk purest way....in a stereotypical sheep like way.Even calling Punk an attitude defeats what the punk attitude was supposed to be from the outset. Call yourself a 'Punk' and you automatically disqualify yourself from the club, so that in turn agrees with the original manifesto, so you are after all a punk.....just don't say that you are.

Unfortunately country did happen,and still does!

All that said, Last Exit were maybe the purest 'Punk' outfit ever: four guys blasting guitar/bass/sax/drums in one cacophonous howl that purists of all sorts detested. They were despised as much in the jazz circles from which they came as by anybody/everybody else. And 'Punk' was certainly not a binding force for the CBGB bands: it was simply the only place that would let them play. How do you collect the Ramones, Television, Patti Smith, Talking Heads, and say yeah, they're all punk. Maybe wasn't so much that they "were" punk but rather that they WEREN'T Styx or Foreigner. (BTW, belated apologies to you Britons for those two.)

Yep, Last Exit very good, a few early Industrial bands, some DIY,No-Wave, early-indie, could all argue to be 'real punk'...as they never claimed this, only strengthens their credentials.
No need to apologise for Foreigner as they were, i'm ashemed to say, 50% British. But Styx.....apology not accepted.

BTW, the Dutch pressing of this single features a pic on the reverse sleeve of Sean flashing the U.S. style middle finger salute. A tepid attempt at street cred? Yikes.

Yeah, i remember seeing that picture in the music press. I didn't understand the middle finger gesture back then as No-one in the UK did that. I thought i might buy that american chaps record......most disappointed.