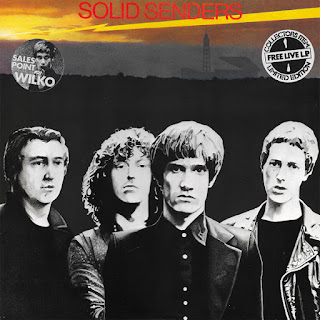 Well, I like tenuous links between posts so I can seamlessly segue between disparate pop groups with no obvious connection to keep the flow as smooth as possible.
So, Snakefinger was in a pub rock band called Chilli Willi and the RedHot Peppers, which bares some resemblance to the unforgivably terrible Red Hot Chilli Peppers, who were inspired by The Gang Of Four (????? can someone point out where that influence actually is?); who in turn were influenced by Pub Rock legends,Dr. Feelgood, via the staccato rhythm lead of one Wilko Johnson.
This leads us naturally to the post-Feelgood works of one John Wilkinson, aka Wilko.
I'm not prone to having any heroes, but if I was to be any musician it would be either Brian Eno or Wilko Johnson.
He's got it all, style, great image, a personality, likes cosmology, perfect stripped down guitar style, and a stage presence like no other; he even came back from the dead for chrissakes!?
I still dress like Dr Feelgood to this day, probably thee perfect band image of all time.
If one thing lets him down, is probably his singing voice is a trifle weak, but hey, nobody's perfect? Which of course makes him...perfect!?
His immense ego, via a copious intake of amphetamines , caused a rift between him and the Beer monsters of the rest of the Feelgoods, and he had to leave to go solo-ish.
His first post-Feelgood record was as The Solid Senders, which the record company renamed Wilko Johnson's Solid Senders; not like Virgin that is it? Record executives have a great talent for destroying their employees prospects, rather like what every corporate interest does to everyone with any ambition to better themselves. There's no room in the stable for the upstarts from the basement of society.
Solid Senders were a Band rather than Wilko's solo project, and having his name in front of the groups inevitably led to this being a short project.
The music is a slightly funkier version of Dr. Feelgood, with less menacing vocals.
A great album indeed, released with a free Live album attached.

DOWNLOAD and solidly sent HERE!
Posted by Jonny Zchivago at 10:04

Being a yank I'd probably go with James Osterberg on that hero thing (if I indeed identified such a thing as a hero). But that coming back from the dead thing Mr. Johnson pulled off is pretty impressive. And those pinstripe suits with the flares? Forget it man, can't be beat. Though I recall being modestly disappointed by this album when I had it on vinyl. But then, when you've got "Malpractice" in the memory banks, just about anything's going to come up shy. Sorry that Wilko got together with that short singer from the Who for a pointless album, but I forgive him. Nobody's done the Telecaster more proud than this guy. Thanks for the post.

Mr Osterberg was recently seen doing the rounds in europe,and turned up at a festival in France(near me), and he now looks like a ball-bag with a bonde wig atop;but hey, why the fuck not?

Some culture-less yoof was also heard to comment, upon seeing Wilko on TV, "Hey, thats that geezer from Game Of Thrones".....proudly ignorant i said 'Game of Fucking What????"
I probably watch it if they wore pin stipred suits with flares, and beat people to death with a telecaster.......but no its just complete shite....apparently, cus i've never seen the gamer generation nonsense.

Agree the Igster today is not the Igster of yesteryear. But the fact he's outlived so many is in itself remarkable. His latest release is a singer's album, not a rocker, something to shelve alongside Bryan Ferry and David Bowie, apparently. Ah well.

I love that the record company has to include the sticker, "Sales Point--Wilko" on the cover of this one. If I don't recognize the guy on the cover, why the hell am I looking at it? BTW, did Bobby Gillespie cop his suit style from Wilko? I don't much care, just musing. And you folks on the island get a lot more exposure to Mr. Gillespie than we do so perhaps you can inform.

>>> I still dress like Dr Feelgood to this day, probably thee perfect band image of all time. >>>

That's exactly how i amagined would dress a guy called Johnny Zivago!!!!

BTW i bought this, and the Lew Lewis one, amd the first E&THR during one of my all day standings at a Records & Tapes Exchange, when i was totally out of cheap punk albums to buy...

Liked more Eddie & Lew, since i was ans still am into punk & all the flavours (crust & blackened crust, d-beat etc), i prefer baic r'nr if is really wil or infused with blues, and i do play (very badly) harp too...

(and if you wanna know how do i dress, well, on late seventies musical terms, it's a mix of Becky Bondage & Slits, with very long black dreadlocks and red braids!!!!)

Helloooooooo Lilith. Didn't you get off with Adam in the garden of Eden?
Predicatbly I had a teenage crush on Beki Bondage and the Slits so you sound alluring.
Yeah down'n'dirty basic R'n'R is what i dig most,despite my reputation of posting weird and crazy shit.
Would that be record and tape exchange in Camden? Was often in there in the 80's/90's,worked at camden lock market. Had a problem with the price stickers they slapped on the covers! Annoyingly difficult to remove.

AHAHAH,
actually i used to live for a while in the flat if the strip club in the "roundhouse" next to the Marquee in which Adam was a regular (in the strip house flat i mean) but i never meet him...
BTW another regular (visiting the other girls living there) was Zodiac Mindwarp, and Mac Almond was living in the house in front of my window..

About record shops, i uesd to spend entire days in all of them, from the Notti9ng Hill to Sheperd's Bush one (where you could find the most traseures to the cheapest place).. and as you know, if i pointed a record, i had to wait the price decrease, and it meant coming back again and again...

Maybe i even spoke with you, who knows, events and coincidences are so weird, and the world so small for alternative people..

I very much liked keeping the stickers, 'cause back home (...) it was great to show how cheaply i bought very soungh after records...