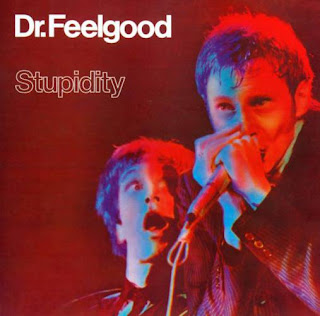 This must be the only number one album on this blog? Indeed this was a UK chart topping outing from Dr Feelgood. A fairly standard Live album, where the boys run through a selection from their first two albums plus a couple of covers. Nothing unusual happens, which is the problem with most live album. The atmosphere doesn't even really sound as electrified as you'd expect at a peak Feelgoods performance. I'd see the point if the albums were overproduced, but they were virtually live in the studio as it was. A typical gap filling cash-in by a major record company......but an excellent one however pointless.I suppose a video would help,as a recording is lacking the visual aspect of Wilko Johnson's stage antics....a vital ingredient.

Don't be stupid DOWNLOAD it HERE!
Posted by Jonny Zchivago at 09:49

Thank you for the uploading!
Allow me one Q: The post refered to 13 songs (13th=Roxxete)The file also contains a 15th song=J. be Good. No 14th song exist. Any explanation?
Thank you in advance! Greetings from Greece.

Sorry no clue what happened there without investigating & I can't be bothered to do that.