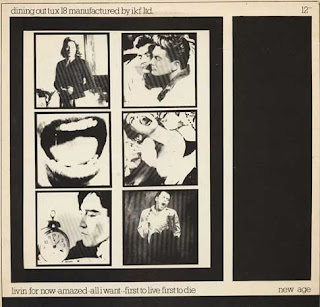 New Age started off ok, reasonably proficient post -punkers, like a low-budget version of 'The Sound'. Then evolved,or devolved, into Leicester's version of Classix Nouveaux.
As much as I detested all that noo romantic style over-production at the time, I now find it bizarrely attractive.I'll even admit to liking the Gated Snare drum nowadays, even though it appears not on New Age's very over-produced LP. The acoustically dead sound now sounds futuristic in a retro-futuristic kind of way.
I gotta like this 'cus A Flock of Seagulls are unashamedly a very guilty pleasure of mine, and I love The Sound, so add these factors together and you got a pretty fine example of post retro-futurism here!!!!????
Fuck me, I talk a pile of shit sometimes, or is that most of the time!
To complete the Leicester connection, its all released on that bloke from The Disco Zombies' record label, the marvellous Dining Out Records.
They also featured on the excellent leicester compilation: "Where The Hell is Leicester?"


"All the Monkeys Aren't in the Zoo,Marylou"(LP)


DOWNLOAD everything by new Age HERE!
Posted by Jonny Zchivago at 10:25

Don't feel bad - I too quite likes me some occasional Flocks of Ludicrously-Coiffed Seagulls. (Tho I could live a long fruitful life without hearing "I Ran" again.) If they'd looked more normal and had no hits, they'd be cult legends and all the cool kids would be name-checking them.

Hi there, just became aware of your blog through Google, and found that it's truly informative.
I am going to watch out for brussels. I will be grateful if you continue
this in future. Lots of people will be benefited from your writing.
Cheers!