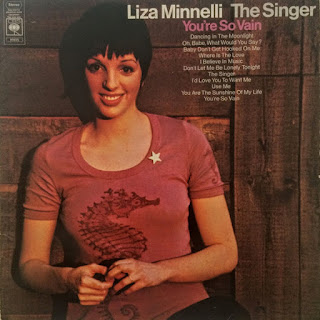 As i'm obviously having a cabin fever moment,the symptoms including  an inexplicable obsession with Yes,among other No-No's; so I figure its time to select some right-on cheese.
Yes...., it's showbiz royalty,Liza with a 'Zee'. Punch drunk and Judy Garlands' daughter by Vincente Minnelli. She looks like a fuck-up in the album photo with a demented thousand yard stare. She didn't quite reach the heights of self torture that her mother so openly displayed, but there was a moment, in the nineties, after she married David Gest that she became part of a living circus for a few years.
'Cabaret' was her 'Wizard of Oz' moment,which gifted her a loooong slow declining career slide in quality.
However, when I was deeply inside the easy listening counter-culture of the nineties, this album was one of my favourites. In between the cheesy song'n'dance one woman show style numbers, there are a few cool funky tracks, Especially, "Use Me" and "Dancing In The Moonlight" which would get even the most introverted Gaylord tapping his feet.
There's also a cop movie soundtrack version of the horrendously smug Carly Simon number "You're So Vain",which was written about me......I think?
I saw one of those 'greatest album' programmes on BBC4, and it  featured toothy tunesmith Carly Simon, who never stopped telling us what a fucking gorgeous looking genius she was....maybe that song was about herself after all,and not me...or Warren Beaty? She's so Vain,she probably thinks this blurb is about her.....but with a great set of nipples,as she points out on the candid album photo. No such pleasures on the Liza Minnelli cover shot. Singer songwriters are wankers anyway, and Liza,with a Zee, could hardly write her own name never mind a smug self-satisfied anthem like 'You're So Vain'.
You'll feel dirty after playing this unpretentious funky showbiz ear battering classic.....i'm still scrubbing but the stench won't leave my skin,or my mind.Why won't it leave!? This must be what it was like to be arse-raped with an Oscar by Harvey Wankstain?
I suppose I should be posting some obscure Industrial cassettes from former Czechoslovakia, but this stuff is far more frightening, and far less fucking boring......and certain not to be reissued on Vinyl-On-Fucking-De-Fucking-mand.
I'd love to dig Marvin Hamlisch,the producer of this album, up to have a go at rearranging that 'NON: Rarities Box Set'(Only 150€ plus p&p from HERE!) with brass and string arrangements..maybe adding some lyrics from Hamlisch's classically terrible "A Chorus Line" as the cherry on top......now that's what I call 'Subversive'.Non?

DOWNLOAD with a dee HERE!
Posted by Jonny Zchivago at 10:37

I've been finding I've got an odd quarantine predilection for Yes as well, going as far as the Rabin years and even ABWH! Been putting it down to pure escapism, the more outlandish and sublime-ridiculous the better.

Thanks for the Minnelli - there should be no guilty pleasures, just pleasures.

When I was a lot lot younger I watched Cabaret and with a Zee and Joel Grey (to my young mind) were in the most sinister but a bit sexy film since The Cross And The Switchblade ... Joel playing a role that stereotypes greedy Jews in front of a Nazi audience when he was Jewish himself and women singing about how they are only fucking people "in charge" and vicariously the audience in order to survive but at the first opportunity they will run in order to be free. It's bizarre to me that it gets theatrical reinventions as this big chorus song spectacular. I see it as a horror film.

I won't be listening to this one coz life's already depressing enough ... I'd prefer to remember in her full-on darkest moments

also have to say that Carly wrote it about me ...

but now you mention it, it really is smug as fuck. I'd spent most of my life not thinking about it. Now I hate her and I feel much better because in a lock down we all need new ways to spend our time. Bravo!

Much preferable to obscure Industrial cassettes from former Czechoslovakia -- thank you Johnny. One vote for more quality cheese

I've went a long with you, Johnny. But this is TOO avant-garde for me! I've tried but now my ears are bleeding and my brain's protein is starting to curdle ... goodbye ... ü9aohaoksdfälkjadll!!!

Easy-listening never is. I find post-the-cunt-with-the-eye-patch Dr. Hook the most lethal of the lot.

Liza didn't initially know that her numerous husbands were gay. But her main criteria for compatibility was to find a man who could help her shop for clothes and whip her up a fabulous hangover brunch. Sorry but you can't get a straight man to do those things for you girl.

Fucjki n' 'ell..i've been out all afternoon drinking guiness in a french villag3e, avoiding gendarmes, and now I come back to an avalanche of comment....all good....and now i'm gonna have to post more shit like this. Antony Newley anyone?...if there's a weirder singer ever i wanna know about him/her

@ Alan Burns...to this stir crazed Brain did yes have the best bass guitar sound ever before Jean Jacques Burnel?...Fragile...wow!

@badgerstump.. aww com'on.... "Use Me" for fucks sake....can't get much darker than that..especially if you can dance to it!?

@ Ivan Rimjob...like Liza, i never realised her hubbies were Gay....my Gaydar is rubbish. I can do the shopping thing though for at least 10 minutes.

@ Mr Dave....glad you agree on the generic industrial cassettes.....aka the new normal. I'll likely do more Avant-cheese cus i enjoy it.

@wolfie come back to me!....i'm sort of sorry i did this to you...a bit. I blame that Frank VOD geezer for putting me off the less avant garde shit he releases because he thinks he's sooooo weird!

i can't dance so that's my excuse ... avant-cheese? crack on brother ... just glad it's not me that accepted the challenge!

and you have definitely accepted the challenge without anybody actually asking you to do it.

looking forward to it. just when I thought Covid couldn't get any worse, you give me a splendid exit strategy. bravo.

@wolfie didn't know you soldier but i've lit a candle in your honour. it's lavender ... hope that's OK?

Oh hell yeah they did. Squire's death was a huge loss to British rock. Even in the year that Yes all did solo albums, Fish Out Of Water was head and shoulders above the rest. In the parlance of the yoof, it absolutely slaps.

YOU'RE THE ONE WITH THE APRICOT SCARF!!! I fucking knew it.

"Probably the most famous star ever to marry a gay man is gay icon Judy Garland; two of of her four husbands were gay. Garland's second marriage to Vincente Minnelli is perhaps her most notorious; they married in 1945 after Minnelli directed Garland in Meet Me in St. Louis, when Garland was only 23 years old. According to the biography Vincente Minnelli: Hollywood's Dark Dreamer, Minnelli lived as an openly gay man before coming to Hollywood, where he began to feel the oppression of the rigid studio system. Garland became aware of Minnelli's affairs as their marriage progressed, once attempting suicide after finding him in bed with another man. After their divorce and a subsequent marriage, Garland married Mark Herron, only to discover his homosexuality and divorce him months later after he beat her.

The apple didn't fall far from the tree with Garland's other daughter, Liza Minnelli, a gay icon in her own right. Minnelli caught her first husband, musician Peter Allen, in bed with another man on her wedding night. If that weren't shocking enough, he had an affair with her mother's husband, Mark Herron. Years after their divorce, Liza set the world agog with her marriage to Gest. After their divorce, Gest sued Minnelli and accused her of everything from spousal abuse to giving him herpes. Minnelli, in turn, blamed the marriage on Michael Jackson..." blah blah blah (from Vice)

In a world with government-mandated social distancing, these human tragedies could never have happened!

@intrepid reporter...to whom are you referring? I am an avid scarf wearer,but i'm not sure i have an apricot one in my collection!

Dear Rimjob....i blame everything on Michael jackson too.
Interesting insights you have there,has anyone make a warts and all mini series about his?.....and why is this and the Judy Garland posts i've done more popular than anything else i've ever posted!?
Michael Jacksons fault obviously!

@Alan Burns....i sense the use of a Rickenbaker.I've been playing the remastered reissues,and they're compressed so much i had to turn the bass down as my speakers were imploding!

Dr. Hook's gay following put all this Garland/Minnelli/Yes shit in the shade.

Loved 'Fragile' and I may yet love this too.

You said "You're So Vain" was about you.

C'mon, man - pay attention. It's no fun having to do footnotes.

@intrepid ... how silly of me...anyway i was the one who walked into the party as if i was walking on to a yacht....but,in a force ten gale.
Anyway, Badgers Stump reckons it was about him, maybe he was the guy with the Apricot scarf?

@ Shug....Dr Hook eh? The cunt with the eyepatch is in the top ten superfluous members of bands...like Bez, Paul Rutherford, Chas Smash, that dancer with Howard Jones, and all of Spandau Ballet.
Not aware that Hook's Gay following got anywhere near the legions of Gays who LOVE Garland/Minnelli.....surely they were housewives' favourites?

You're all underworld spies as far as I'm concerned.

Perhaps I'm getting them mixed up with Dr. Kiss-Kiss?

"Cool" and "funky" you say? Alright grandad, I'll give it a listen.

I always use the words 'cool' and 'Funky' with a trace of irony....what d'you want me to say Anonymous Grandaddy who's just heard that the latest street rap uses words like 'Sick' and 'The Bomb',and he says Pfffink instead of Think.
Yeah there are a couple of 'Sick' Tracks which are 'dope' what about it?

Hey Boomer ... nobody uses cool and funky anymore ... stop showing yourself up ... it's da yoot (check the spelling) and it's da bomb. everyone knows that.