The Zchivago Reviews Series - 3/ Guns N' Roses - "The truly awful "Appitite For Destruction" record (On the truly very awful Geffen Records) from about 1987! 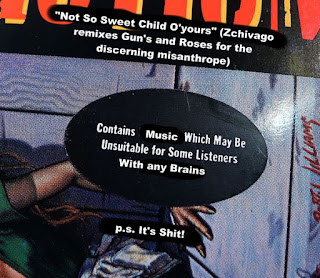 As Prince Harry and Megan......sounds like some kind of naff novelty act doesn't it?.....In fact it is....but.....Prince Harry Hewitt,he of no royal blood at all, said that the internet has bred nothing but Hate. So, this inspired me to think of thee most hate inducing bunch of clueless twats ever to grace a stage in the name of Rock'n'Roll ever....obviously, Guns 'N' Roses. If only they'd called themselves 'Obviously Guns'N Roses', it wouldn't have been quite so terrible,but they didn't, so, Hey-Ho!
Holders of the 'Single Most Badly Dressed people Who Thought They Were Cool' Award for at least ten years running,with Motley Crue and Milli Vanilli in an interchangeable second and third place;their sartorial inelegance was like an explosion from an Australian's nightmare in a German fancy dress shop.
And the 'Music'...Oh god, the music!?
Fronted by balding bandana sporting screecher,Axel 'there ain't nothing I ain't done me',Rose;he and the rest of the group, meaning 'Slash' and the other ones,flesh out a comic book rock fantasy like a graphic novel on how NOT to do it.Like Spinal Tap but without the Jokes.
However, Rose's attempt at slinky rock dancing would have fitted very comfortably in Hollywoods number one Heavy Rock spoof,as would a lot more aspects of this living taste bypass that make Aerosmith look like Dr Feelgood.
What's incredible is that whenever they are interviewed,and why anyone with a brain would want to even acknowledge their existence(?), they seem to think they are Punk's!?
Maybe they were all locked in a cupboard with a Motley Crue record slipped into a "Now Thats' What I call Punk Rock" sleeve as children,I Dunno!? Whatever the reason is they can't have actually listened to anything that could conceivably be described as Punk in their lives?
Prancing around like very well fed but 'wasted' 'Rock Stars,and buckets of recycled 'look at me mom' guitar solo's,while doing, alledgedly, wheel barrow's full of illegal narcotics,and thinking its cool.Christ how completely useless be a 'Rock Star'? They offer precisely Nothing to the human story,except how not to be something.
In your nuclear bunker,with one place left to fill,who would you choose to come inside, Slash and Gibson Les Paul, or the carpenter with his tools? Hard decision...Not? Actually,Anyone instead of Slash! In fact, if it was empty, none of G'n R's would get in !I'd sooner die alone quaffing down as much irradiated water as i could slurp!.Collectively they have less than nothing to offer the future world. Imagine the race of cretins we'd have if Axel Rose and Grace Slick were the new Adam and Eve? They'd have tasted the fruit from the Tree of Knowledge within a few seconds of arriving in the nuclear garden of Eden.Expelled from Eden for being crap,it would say in the post-armageddon rock'n'roll Bible.
If these fuckers are in Hell when I die,unless they actually abolish death, like they are trying to do in the Co-Vid crisis,then I well and truly will know I am there.Thankfully we have the eternal blackness of oblivion to save us from this utter shite!......discuss.
By the way,as always,there's a re-edited version of their most awful hit from the album below...imagine this on a loop in hell,and it would be better than having the official version blasting out at 12 in Satan's special hell for music obsessives.
Tracklist:
1. "Not So Sweet Child O'Yours (Zchivago Remix)" (6:35)
DOWNLOAD to satisfy your appetite for Destroying American Rock HERE!
OR
STREAM it HERE!
Posted by Jonny Zchivago at 14:28

I do like the intro bassline on "It's so easy" but I always try to find something good about music. Duff the bassist is the only likeable member Axl could be Bono's distant cousin, just an insufferable twat.
A girlfriend from that time hated them and it would crack me up to hear her rip into them as she clutched her Love and Rockets, Bauhaus and the Cure Kiss Me X 3 discs closely.
Neil Young released the This Note's For You album about a year after AFD.
I know all the lyrics to Bela Lugosi and once did a kegstand at a Dave Mathews Band concert!
I've been telling people about it for the past two decades.
I hear Megan and Harry are prattling on about racism, they should do a presser in a boarded up section of Baltimore after midnight if they want some street cred.

Brilliant....as soon as I saw who you were going to give a well deserved kicking to I couldn't wait to read it....FUCKIN' HILARIOUS....but oh so true.
Well deserved pat on the back my good man....keep it up.

Wasn't Bela Lugosi's Dead about Plan Nine From Outer Space?...that makes it cool.
You can always find something of note in any music if you look hard enough...but some records just ain't worth the effort.
We all have our guilty pleasures that are theoretically unsupportable but...we like 'em? I may do a series of my most guilty loves,just to get called a Penis more.

@ Softshoebanana....i certainly enjoyed myself at least, gald it entertained you also.....probably fucking Pet Sounds next up. Sick of seeing that one track wonder stuck at the top of the best of all time lists,along with Revolver.....but I like Revolver,so that gets away with it....as for the rest of the Beatles' canon...wouldn't piss on it if it was in flames in the gutter.

Guns 'n' Roses play Ambient... I'd have included their Charles Manson cover version, mainly because I've got a bit of it handy.

Great reviews so far Jonny, I hope you will be doing Morrissey who must be the twattiest of all twats.

@ Reg Nose...cheers reg.
as for Morrissey, i'm sad to say that later in life i was bored and played a smiths album for the first time, and....er.....enjoyed it somewhat!?
Its now become a guilty pleasure.....the lyrics are rather honest,and actually funny in places.....however Solo Morrissey may be different.I do like the way he gets up peoples noses...not many of those about these days. I'll put it on my 'to do' pile.

Almost as bad as Rage Against the Machine twats on Sony records while talking about burning it all down.
How about some redistribution comrades?
Note to the twat singer-Your mom is white.
Morrissey? He's a fucking champion among men and the Smiths are the best of the 1980s.

They thought they were punk 'cause they originated in L.A., where drugs ruled and were a common bond w/all who imbibe. Never political, folks always saw the L.A. punk "elite" hanging out drinking and doing drugs with the hair bands at parties- Motley, Halen, Roses. They were punk via osmosis.

One look at Guns 'n Roses and you know they tour with a guitar technician. Gotta dial that "tone" in just right. Can't let the musicians anywhere near their instruments until they hit the stage.

Amazing how their band name and their hits have that apostrophe that stands in for a "hick hiccup." Reminds me of Lil' Abner every time.

I listened to "Not So Sweet Child O' Mine" all the way through without shutting it off. Clearly, you have failed to capture the essence of this band.

A Moz review by you Johnny would be hilarious. Moz is great, but one of the biggest cunts on this planet. Also Lyndon is a grade a shit disturber, that'd be funny to cover too.

Twattiest twats sit around bitching about bands that still get paid when no one wants to hear your corn studded audio turds.
Looks like they have the last laugh.
Any goddamn free music downloads up in this motherfucker?
At least you can handle comments unlike some of these other cunts.

I don't think you are being called a penis. It's like the rating you're being given. Like "yeah, penis!". "Cock on, son!". That sort of thing. Engineers and mechanics in America often describe something good as "tits". As in, "Ahhh, that new Tesla is tits!"
So, Penis!

@luca....I can't slag anyone off for being a cunt,not enough of them about... the right kind of cunt that is....not a boss man cunt, lanlord cunt,politician cunt etc. Morrissey and lyndon ,as unlikeable as they seem do challenge us to question ourselves on awkward issues..devils advocate stuff. Also Lyndon was in PiL mark 1 so he's exempt from musical criticism no matter how dire his post 1981 output is. The Smith were too good to slag off too. We need cunts like these.

@spacious specious....you listened to 'Not So Sweet'all the way through? I never managed that and i made it! Hats off sir.
Guitar Techs,roadies,groups with several different guitars for different toons are the stuff of art imitating spoof. How slash can look in the mirror knowing he has a guitar tech is a sad indictment of the man....if can see through his thick curly fringe that is? Didn't he come from Scunthorpe lincolnshire or another place with cunt in its title?

Yeah the kings of irony or hypocrisy or both are the idiotic Rage Against The Machine.Is that Rap Metal?....could be the worst genre ever or wot?

Dear 'The Violator'....depeche mode fan obviously,which automatically disqualifies you from being taken even half seriously as the cheap heckler you have ambitions to become.
And that's enough of all that bad language you naughty twat you!

Aaaaah I suppose your right 😅

With the benefit of being able to take a long look back, Lydon has not become a parody of himself. Post 1981 output notwithstanding. And watching old clips he has done and said some very satisfying things. Mr. Smith too. They are not just playing "Look at me".

Shit lyrics. Maybe even worse than McVarna or Gunz 'n' Dickeds! More sook than Robert Smith.
Go on, review Meat is Dinner, or whatever it's called. I'll shout you a pepsi.

Yours in Christ,
Anders L.

Dear Anders L...i said i ain't gonna slag the Smiths didn't I...although, yep shite lyrics,shite song too.I can't get up any enthusiasm for The Cure either.Green Day, now you're talking...or Brown Day as we like to call 'em.