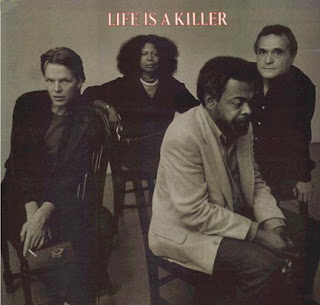 Mutant Disco was the big thing downtown,and Giorno wanted a piece of it. The irritating ranting through a delay effect has now gone, and been replaced by irritating ranting in front of a group of session musicians yawning out some over-produced elevator disco. Who said Giorno was a poet anyway?...oh yes...himself!
Even Brion Gysin gets in on the dance poetry act,with some afro-beat nonsense,which drowns out Bri's thoughts on 'Junk'....nothing like a diversity of subject matter in a lifes work is there?
There are other mutant disco poetry attempts,namely the Jayne Cortez track, which features the truly awful trendy instrument of 1982,the dreadful Fretless Bass. If the motive was to get the public to listen to the words, which apparently they can't unless one puts a disco beat behind everything;then adding some fretless makes this member of the public skip to the next track.
There's some ironic country and western,about Gay Cowboys which is...uhm... bearable.But the piece de restistence is the 'you can not be serious' moment by the 'Four Horsemen'. It's this kind of stuff that reafirms the public view of artists as lazy out-of-touch elitest piss-takers. Imagine stumbling into a primal scream therapy session with a middle income household in the suburbs(what you're doing there?I Dunno? Burgling the place maybe?).They break off from the screaming and ecstatic dancing to welcome you aboard.
"Come and Join us", says the one in the ethnicly inspired shawl invitingly.
Being of a polite dispostion, you accept the invitation and start waving your arms in the air awkwardly and emit a repressed,and slightly embarassed yell.They welcome you with eye contact and one of those insipid smiles Jehovah Witnesses have,then invade your personal space with....gulp!..body contact.....ugh!...(shudder)!
After the six hour session,you hand out your fake telephone number and e-mail address and leave.....never to mention this to anyone!..The kind of thing you do when you wake up hung over after a wild night of dancing in a mutant disco,in bed next to a morbidly obese balding shemale,with a memory lapse and your bottom hurts?Maybe the same goes for this album, except for the Billy Burroughs track of course,who can never do any wrong.

DOWNLOADing is a killer but not as much as uploading the Fucker,get it HERE!
Posted by Jonny Zchivago at 11:15

Sounds like even Bill Burroughs can't save this disaster, but I'll give it a listen. thx?

I really wish I hadn't listened to that Brion Gysin track. It sounds like something that would have been rejected from Sesame Street--which actually had some good stuff, back in the day, like this, sung by the great Dorothy Moskowitz (of The United States of America): https://www.youtube.com/watch?v=0y0ffj__R4g

Billy Burroughs can do no wrong?
Have you heard Elvis of Letters or that thing with Curt whatsisname?

Elvis of letters is just some alt rock nob doing a n...n...n....nineteen with some tapes of Billy,again doing no wrong....as for the curt thing...is that Kurt Vile?...not heard it,but one bets its the same shit as the Elvis thing. No blame at the doorstep of Burroughs.

Agreed on Elvis and the Curt thing. A lot of wannabes leech onto people like Bill. I’ve always suspected that was one reason for moving to Lawrence Kansas, aka the middle of nowhere. He'd still do the readings, recordings and visits to the slums of NYC, but he maintained a day to day life in a place far away from the blood/soul sucker culture celebrity tends to attract. Out there he may have been surrounded by the ill-informed, the ignorant, bigots, racists, homophobes, soon to be trump supporters and the like, as we all are to some extent, but he owned guns and was knowledgable of and proficient in their use, which they‘ve all always respected. Besides target shooting and shotgun art, I imagine they were useful for keeping the vermin, four and two legged, at bay. I’ve also wondered if another reason for choosing Lawrence could have been it’ve was the backdrop for the nuclear holocaust TV movie The Day After in 1983, which frightened US society into good behavior for a few hours, sort of like 9/11 did 18 years later. Of course, it only reemerged even more malevolent and toxic..

"The 'Priest' They Called Him" - Burroughs and Kurt Cobain, 1993. It's not very good, Burroughs' voice and Cobain's guitar are just each there and never come together.

Oh Christ...of course it had to be Cobain! Probably why i've never heard it.

@rev.b , i suppose the UK equivalent of "The Day After, would have to be "Threads" set in northern town Sheffield.....now that wouldn't have made it to TV screens in the USA..prompting defeatist attitudes as well as being thee most depressingly bleak terrifying tv film ever made?Weirdly it all starts because of russian and american meddling in IRAN!...spooky..makes the day after look like Dallas....stream it here:

I have seem Threads too. Both films involve plausible scenarios and both are still scary as hell. At one time there was a youth program in the states called ‘scared straight’ that involved taking kids to prisons to see what the end result of their drug use might be. I don’t think that took hold either.

...and yes, TDA was very much like "Dallas", but with mushroom clouds and radiation. Thinking of ‘poets', limey scribe Adrian Mitchell wrote what I thought was an effective piece along the same lines called “On The Beach at Cambridge.” I first heard it on an ep put by Recommended Records in support of a UK coal miner’s strike back in the day. After yer done with the screwball yank scribblers, I don’t s’poze you have any of his stuff lying around…

Yeah I've got a lp from the sixties,something like 'A Laugh a Bang and a Hand Grenade',something he did with Henry Cow/Robert Wyatt, and some Rer Quaterlies,that he was on.....which i presume includes on the beach..I was gonna do some limey poetry, mainly Ranting..but i will see if i can find and proper poets as i'm on a spoken word trip.

I belive it's the Cow Wyatt one, called "The Last Nightingale." At your leisure.

I think in terms of essentialness, Elvis of Letters and Priest They Called Him are in a tie for dead bottom, with Spare Ass Annie and Other Tales second from the bottom, although Let Me Hang You is steadily sinking to the bottom.
I think the photo of Cobian and Burroughs speaks volumes about that meeting. Poor ol' Bill looks like he's trying to get away from the cloying junkie fanboy who's anxious to get his Rock God street cred ticket punched.
Honestly, the only picture I've seen with Burroughs and rock figures where he doesn't look bored out of his boney skull is the one with him and Patti Smith. They look genuinely affectionate towards one another.

Hi! Im not a very well english speaker/writter, but i love all the poetry and music you have in the blog. I have a problem with the archive of this record, i cant find the Amiri Baraka track. I love Baraka's work, if you have anything else of him, i appreciate it.