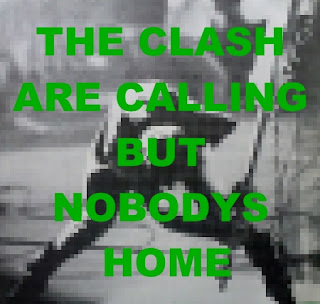 THE CLASH – London's calling....Tell 'em i'm fucking OUT!
London's Calling???...who gives a Fuck!? I hear that Scunthorpe's Calling next week....I won't be answering that either!
However, this value for money double disc adult orientated Punk is thee single most boring supposedly edgy rock album that ever existed, clueless politics, tuneless lumpen riffs, overproduction and stylised painful fashion input.This album was hilariously voted 'The Best Album Of The Eighties' by Rolling Stone Magazine a few decades ago.....dispite the fact that it was released in....er.... 1979.....which says a lot about Rolling Stone magazine doesn't it?
Fucking hell, it's got the words printed inside,which is always a bad sign.That usually means that the scribe who penned them thinks they are serious and important.In other words.....yaaawn...they've got something to say....ahhhhh.
It's not the music as such that gets on my proverbials,its the please like us musicality of it.They wanted to make nice tuneful music for their 'fans',who,along with Fall Fans, Residents Fans,idiots into Krautrock who think they've discovered something nobody else was aware of...but worse....are thee most despicable morons on the planet.Who's your favourite band, mine's "THE CLASH"...spat out with a child like pride......The Only Band That Ever Mattered???...some wag said once....more like the only band that NEVER mattered.Just playing at being the rebels they obviously weren't.The single most boring rock band that ever existed,I repeat.
Listening to Mick Jones trying his best to sing properly is an obvious low point on this nicely priced,value for money opus.
As for their Punky-Reggae by numbers outings,OMFG!? "Please like us Mr Black Man we're like you really,we're repressed too" says the diplomats son and his art school chums.They'd be the first to slag anyone off for Cultural misappropriation,but as for the govt's they pretend to dislike,there was one rule for them and another rule for everyone else.
"White Riot" has to be the single most stupid record ever made during the Punk Rock window.Also the record that convinced that idiot who started 'Punk' magazine in New York that he and the Ramones invented Punk Rock!Not that the Ramones ever claimed such a thing naturally.
"London Calling"'s title is suggesting the same tenuous claim.
Of course it's as Eclectic as fuck,desperatley trying to please everyone at the same time,while at the same time residing in that place where everyone goes when they've ran out of ideas.
"Let's mix it up with some ska and african music man" Says,Joe 'Woody' Mellor the diplomat's son,"Yeaaah,no-ones done that before!?" says the art school rejects in response......I notice that Paul Simon's "Graceland" resides at number five on the Rolling Stone list, the very zenith of cultural misappropriation,and I dare say wasn't in slightest bit inspired by the Clash's thieving from their new found Black Chums;but Simon went one further than Simonon and his cohorts of impeccably good taste, and actually made a bunch of African musicians record,write and play most of the music,uncredited, for the minimum wage.While he played (Achthung! possible anti-semetic joke coming up!!!)....wait for it,wait for it.... 'The Jewish Piano',I'll repeat that....'Thee Jewish Piano', with the the vast profits he received for the career resurrecting hit album.Maybe it was some kind of avant-garde statement about slavery or something?Either way,it's one hell of a shite LP.
I did it, I managed to slag off two pompously arrogant albums in one fell swoop.
The Clash's eponymous debut was relatively good however,if you managed to block out the pale white boy crypto-hooliganism,and the sweet vocal harmonies behind Strummer's,I'm from the gutter,me" slurred yawping.The politics.....oh Christ,the bloody Politics.Since when was Vote Labour a subversive statement.Give us a job and everything will be alright,seems to be the policy.....er.....No!...and White Riot?...Give Violence a chance is the mantra,but it's only for us white chaps,you Blacks have your own riots.Such Dumbness never existed beyond a Sham 69 lecture about how us pop stars are the same as you,but keep off the stage.If you wanna be patronised listen to the words,alas if you want a good time,just absorb it as some jolly good,but terribly played and recorded cathartic rock'n'roll that was a la mode for twenty minutes in 1977.Better still listen to cartoon Proto-Punk leg-ends, The Ramones,which is kinda like The Clash but with better,probably more subversive, lyrics.And without the dodgy attempts at 'Punk' fashion.
I Can't face doing a full review pf "Sandinsta", sorry.
Apart from, it's Truly Awful,'eclectic' as fuck,and endlessly dull.
STREAM ZCHIVAGO's REMIX OF THE MOST LUMPEN OF THE LUMPEN CLASH RIFFS,NAMELY, LONDON CALLING HERE!
Posted by Jonny Zchivago at 10:29

Slightly off topic...B.A.D are quite funny in small doses, very small...Never really got passed 'enough rope' with the clash, bits and pieces here and there maybe but not too much in one serving.

Just jammed Radio 5 Clash remix in das Auto. Rolling Stone? Emergency toilet paper and they gave Black Sabbath a bad review like the clueless twats that they are.

Great stuff....not as top notch as your obliteration of those Irish fuckers but that was a hard act to follow.
Keep it up.

this has got fuck all to do with the clash, but can you (or anyone else) remember an album which had a picture of reagan with a flag featuring swastikas behind him?

Were you actively trying to sound like some dumbass 22 year old hipster blogger here? Or just having a bad day? Or honestly think all of this means jack shit? Some combination of all three?

Occasionally, you have some valid points to make and things to say. Not so much in this instance, I'm afraid. Only your worst enemies will tell you things like this by the way, so - your choice whether to mull that all over or not. But yeah - not your greatest moment here.

Reagan and swastika's????.....wow! What a sub-adolescent political statement of an incredible lack of imagination is that?.....typical Clash

I'll take that as a co,pliment coming from someone with clash connotations in it's nom de plume. Likz i care what you think Lol.

it wasn't a clash album. it was an american band in the early eighties i think.

I think you're right Anonymous no.4-ish...it certainly sounds like an american group putting on a terrible london accent......strummer convieniently lost his upper class west country accent to turn Punk,and dumped all his middle class squatter friends in the process.

Anon might be thinking of this Black Humor album. The cover of the reissue features Reagan, flag, & swastikas.

Jonny, yer blog is a curative for all my ills (well, at least a couple).......your efforts and humor (sic) are much appreciated.

This blog could even cure the co-vid crisis....either that or shutting social media down for six weeks instead of the country.

...and yeah...in response to an earlier comment....How can anyone give Black Sabbath a bad review...certainly not in these pages at least!

You should get out a bit. Being so opinionated will give you a twisted face.

Still thinking about U2, meanwhile here are the Clash playing No Wave:

Anonymouse no.10000000.....i assume that you know that your statement is only your opinion? Or are you one of those no-marks who have no opinion?

Hi Philip..best not to think too much about U2...can cause diseases that.
Excellent Clash No Wave..if only they had sounded like that then I'd call 'em 'Punk'....I've done a Guns'n'Roses one for my next assasination.

Aw nutz, I'm late to the hate. Haven't heard this one in close to 40 years (YES. I. AM. OLD.) But IIRC it sucks every bit as hard as you say. Shit poor reggaefication mixed with shit poor Americana-ization --- result: shit poor. Duh. Bandanas, sleeveless shirts, and greaser hairdos.

Worse than Springsteen in just about every way, which is really saying something.

This is the best thing the Clash ever did!
https://youtu.be/cr6a0ojiw7A

@Ollie stench....one agrees with you...at least they got the Politics right on this one. The lyrics to Maggie Thatcher sum up my politics around the time of the miners strike. I had a Dole Not Coal badge. That bitch saved me from the pits and factory drudgery....wasn't this what Punk should have been saving us from rather than moaning about being unemployed?

Drugs not Jobs:D
We never 'ad it so good. haha

Yeah yr right about London Calling. There's some awful dross on Sandinista too but at least it's a bit more playful than its predecessor. I'll admit I quite liked 'LC' at the time, but realised as I grew up that it was their least enjoyable effort and in fact the first lp was head and shoulders above it and the others.
Heheh great 'remix', like your no-wave Clash too Phillip.

@pinkie....say Yo! to Drugs...not that i ever did myself.Thanks to Maggie Thatcher and the punk Rock ethic, i did it myself and was therefore too happy yo take drugs seriously.Never had a proper job me.
First Clash album was ,politics aside, what Punk should have sounded like...then came the 'please like us' rock album ,to please FM radio in the usa.Then..this shit,and more shit after that,loads more. Like punk never happened were the clash.

I don't think you really get tbe Clash. What are you some fuckwit twentysomething? Simenon was into reggae before they ever made a record - hardly bandwagon jumping. By the way ut was released in 1980 in USA hence rolli g stone.

Er....i don't think YOU get the Clash mate.
From a Fuckwit fifty-something.......of course Simenon was into reggae before the clash,...like they all were.....they say. They were just a pose and you know it.

I knew Simenon before he was in the band - he was a reggae fan. The rest weren't prior to hooking up with Paul but so what? Can't they hear something they like and be influenced by it? That's what every band ever does. The Clash were real - I'd defend the first three albums against any criticism - acter that they lost their way. At the time they were genuine guys who did give a shit - particularly Joe. In the context of being there as each record was released, it felt like an event - something special. Look at the bands who were around at the time - who else was genuine or even gave the slightest impression that they could give a shit? I played in a band that supported every name band except the Pistols and some were total cunts - The Clash were the absolute best - no bullshit fucking around with the sound for the support band, no bullshit you can't go near our dressing room - don't go near our booze etc. The only other band that came close for treating us like humans was The Skids.