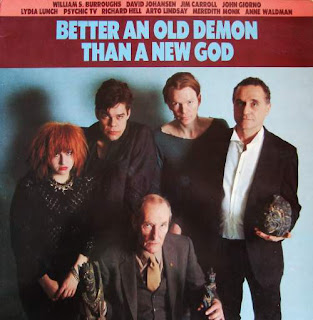 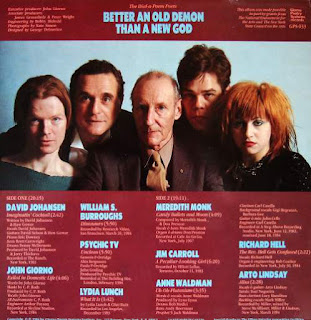 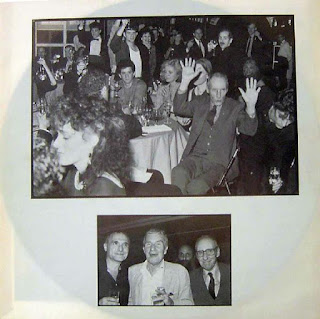 Christ!
There's a few persons in that cover photo who would love to be a New God.Attention seeking wannabes always have to ruin things don't they?
Just look at those absurd alternative pop stars straining at the leash to cosey up to counter-culture icons Giorno and Burroughs.....Jim Carroll????? What? How can you respect anyone who names their group after themselves?
Then there that dick'ead from a Glam Rock group who thought they were the Rolling Stones,flexing his counter-culture cod-piece. I was always on the side of Whispering Bob Harris after he called them Mock Rock when they played on UK TV.
Awww,poor lickle child runaway Lydia Lunch looks unhappy at that big bad old world,like a sulkier Toyah Wilcox grafted onto the body of Kevin the Teenager...bless her.
Richard Hell's on this too, the poundland Bowie as if Bowie only had a small ego, with his spikey hair cut, and someone else's torn clothes....so he invented Punk Rock according to himself in the third person,and now he wants his ball back. Dickie Meyers always regarded oneself as a poet,but at least he had the common sense not to turn up for the photoshoot....probably off his pretty face on paracetamol and codine writing his next experimental pamphlet.
Yeah, I don't like these twats...is it that obvious? Don't get me started on Psychic TV!?
Dickhead pop non-Stars aside, there are a few,very few, great tracks on this flawed compilation,not the least Anne Waldman's "Oh-ho- Plutonium",which could have been a Disco Dancing classic on the "Desperately Seeking Susan" soundtrack that one. Whereas this album should have been called "Desperately Seeking William" as in W.S.Burroughs, and bathe in his art-cred radiation.
The worst track has to be Richard Hells cringworthy counter-culture by numbers irony bypass and naked application to join the NYC art elite;during which he reveals what we all suspected.....he just don't posess either a sense of humour or self-irony at all.Its track number 9 for a reason.
Then we've got Lou Reed looking like he's at someone elses party on the inner sleeve.
Its grovelling shit like these offending tracks that makes me wonder why I listen to rock music at all.Just cock a lazy eye at that party that the art-rock elite are invited to,but you ain't! This is entertainment kids!?
I suppose one could also accuse the actual poets, or artists, on here of using the silly alt-pop stars for similar reasons.....but...Nah!...they deserve at least a small percentage of the spotlight......if thats what they wanted.Mainly to shift some units I suspect?

I've been there before Shug....i think via facebook., keep on wanking...verbally that is.

@shug...Ps..i like the sound of "Xploration" , i've thought about doing some novella based on a resurgence of DIY music amongst the yoof of the 22nd century,mainly because in the future there hasn't been any new music for fifty years or so,a bit like now, so the background to the plot has Danny and the Dressmakers at number one.
I like anything with prog rock in it too....afterall thats where we're gonna end up on this blog pretty soon.

Wait, don't we _always_ end up with prog rock? In the end, it's all that matters. Remember that Dashiell Hedayett record, "Obsolete"--basically, Gong with some French guy and a weird WS Burroughs bit at the end?

A wee collection of Kerfuffle Press goodies (including the last copy of Xploration) will be on its way soon.

It better be fucking well signed too!!!

To give the pamphlet an authentic avant-garde touch was actually signed to someone else.

The state i'm in at the moment i probably wouldn't notice.
But i adore the word 'Pamphlet'.

Just in case Dashiell Hedayat's "Obsolete" is _not_ forthcoming, here it is:

Unfortunately, it's just 192 Kbps. I've got the vinyl though, and will do a transfer if there's an overwhelming demand for such--back in the day (mid-90's?), Wayne Rogers of Major Stars and Twisted Village (record shop in Boston) acclaim offered me a generous sum for the lp, but I was too attached at the time. Anyhows, in addition to the mysterious Dashiell and Bill Burroughs, it's got Camembert-era Gong, with Messrs. Pyle and Tritsch masterfully keeping the holes in space... holey. Nice!

I may have been a bit harsh on him,but the fact that he was a strutting rock clique insider who nobody had heard of in Europe when i was a young 'un,has coloured my view somewhat.He should have stuck to writing.

I enjoyed the snarky comments even though I'm a huge fan of Jim Carroll's music. I see most "stars" as egomaniacal and out-of-touch.