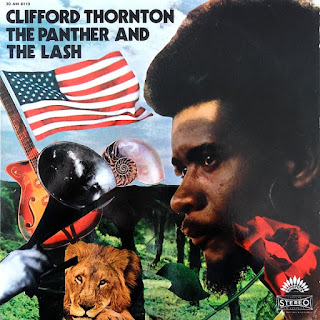 The eye-catching collage on the front cover of this crazy cornet wielding Kat's second solo album, is like something i'd have knocked up for an album without artwork for this blog....yes,it's that good. It screams "Buy Me",but you don't have to do that shit no more,'cus you can download this work of near genius at the bottom of this page.
Also thanks is again due to the French.....choke,spit,......some of whom had the wherewithal to release this platter on the ironically named 'America Records'.....the place Clifford,who is only ever pictured in profile, struggled to find an audience.
French people will turn out in numbers for anything exotic enough to assuage their post-colonial guilt, even for a moment; "Raciste????...Moi!?....Non! J'adore le Reggae et Le Jazz!?".
They,along with The Brits managed to fuck up the third world,possibly for good;but to say sorry, they are keen to look interested in Jazz and World musics of all creeds and colours,and buy that awful 'ethnic' art to pose with in their Salon's. Although this can backfire,especially when a Frenchman tries to play Reggae,or,please lord help us...dance!
There's even a Frenchman on this recording,one Beb Guérin,who was rather accomplished on the contra bass until his untimely death at a youthful 39.As far as i can see photograph-wise,he had the dashing good looks of a pre-mustachioed  Freddie Mercury from one angle, and the fresh-faced intensity of Billy MacKenzie from another.....both also dead.....is anyone left alive out there to greet me when I surface from my Bunker?

As for Cliff,at the time of writing,is no longer alive too,and has worked with all the Jazz greats from Sun Ra to Sanders to Shepp.And he sure can handle a Trumpet....even beyond the grave thanks to his recordings.
Tracklist:

If we and the French, Belgians, etc hadn't colonized Africa, they would be still living exactly the same as in the stone age. They didn't invent anything EVER for thousands of years, unless you count Reggae Reggae sauce, they still haven't (Sub-Sahara). They didn't have the wheel, metals, roads, books, clothes, glass, stonewall buildings, watches, etc, but then again they also didn't have cancer, and all modern diseases, but that was due to them not having some creep like Edward Jennor inventing poisonous vaccines.

When two people kiss, they create a long tube from butthole to butthole

Billy MacKenzie? I thought it was Paul Westerberg in a reflective moment between beers.

Ahh yes, the ol "They'd be still living in mud huts if it weren't for us great whites" argument.

Thank you for this one.

The first anonymous commenter(of course) is a grade A total dipshit. So much so it almost seems like satire and hardly seems worth acknowledging. Regardless, dropping in to say fuck you to that piece of shit.

Anyway, this record is total ripper. I heard it a longtime ago and forgot who it was but recognized that album cover. So thanks for bringing it back to me. Also, sorry to say looks like ol' cliff actually bit it back in the 80s and is not alive at the moment.

Bullseye, great album this. Cliff has left the planet tho'. https://en.wikipedia.org/wiki/Clifford_Thornton

Yes, first comment is shit, but possibly humour ?
Talking about french post-colonialism guilt is also shit.
I'm french and I'm not guilty about colonialism. Very not ! Because I'm against that and that is shit. And so many french guys are like me.
I'm french and I don't care about black or white or blue music. Il love Clifford Thornton as Schubert, K.Haino or Jandek or Beb Guerin, and so many others...
Music has no colour, except musical metaphoric colours. Those Who don't understand that are racists, even if they didn't yet realise that.
Thanks for this post ! Other gems of Clifford with Joe Mc Phee, and on BYG-Actuel label...

@ Jo....indeed, i can't be arsed to take the bait either....especially the vaccine bit,without which most of us wouldn't be here to be as bigoted as we desire because we'd have died of measles in our infancy.

A very noble,subjective and identifiably French speech Monsieur inconnu. Be careful who you call racist,for it may be thou.

It Burns When I Pee

theres a "great" albeit reedicklus (that is anti-semitic) beat poem on sunny's time lp by sunny murray...sometimes other folks' fury can be pretty entertaining.........convictions and opinions are tragicomedy...anyhoo great shares

This is great, thanks for sharing! By chance, have you Marion Brown's Three For Shepp to share?