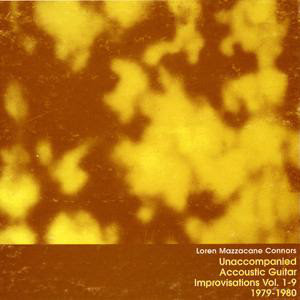 Whoops, I spy Thurston Moore and Jim O'Rourke being name-checked in the credits, but don't let that put you off? This really does sound like the music one plays on your girlfriends acoustic after a night down the pub before collapsing in an armchair with your knob out,dangling in a cold portion of unfinished curry and chips. I dunno if Loren had his knob out when playing these improvisations,but he sure does sound drunk or stoned.All tracks....tracks?... recorded in the famous Daggett Street period...remember that?....Nah, nor I,and it sounds as if Loren doesn't either?...but trust record collector bore Thurston Moore(avant-garde than you) to feel the need for one-upmanship in the 'I'm Moore Avant Garde Than You' obscure acoustic guitar improv stakes.Okay, Thurst, you win....the medal's in the post.
This compilation features selections from more than fifty album sessions,thats at least fifty less than me, recorded by Loren Mazzacane Connors during those infamous,or rather un-famous Daggett Street sessions. Most of the original self-released LPs were destroyed when the distributor went out of business after,surprisingly, failing to sell any copies(?).That means even Connors' Mum didn't even buy one,not even Connors himself,or,apparently,that harbinger of good taste,Thurston H. Moore? Mazza,had to collect them,not in the record collector sense, but had no way of transporting or storing them, so he ended up leaving them in a dumpster......Hmmmm maybe that would have made a fitting punchline?
Derek Bailey he ain't,but his other,more considered works, are rather wonderful. However, I would rather hear this stuff played at partys than that of the guitar player who ruins everything by whipping out his acoustic and playing 'American Pie',then getting his curly haired mustachioed way with all those fickle young ladies lookin' fer an alpha male with trimmings.
This release is for that massive mob of Loren Mazzacane Connors completists out there,come on, put your hands up, I know who you are,and where you live...Nutdale Funny Farm awaits thee....singular.
Tracklist:

*Guilty*, tho' I haven't a clue WTF LMC is/was. Now my collection is complete. I imagine Loren appreciates you resurrecting his 'career.' Any tour plans?… When the acc guitar comes out at parties , I'm off. Ugh! Wouldn’t it be great the that guy was Derek Bailey and everyone else left? Only in my dream it seems.

That's my kind of party....no one there,except maybe 1 other person from the catchment area who are also from the 1 in 50,000 drmographic who dig the entertainer on show... and the entertainment is provided by delboy Bailey,with maybe Jandek on his slack stringed Bass?...wouldn't need to get drunk either.

I always liked the fact that a lot of his stuff is classified as "blues."

"nob out, dangling in a cold portion of unfinished curry and chips"

... those were the days when I knew what it was to be truly alive!

Just got me a batch of Loren's stuff. The old Guitar Roberts' and a couple of newer ones. Still think the Haunted House is my favorite, but the sparse quiet stuff is nice too.

saw him perform in an art gallery 15 years ago, he had a wrist brace, wispy ambient sounding.Frail but intent.
Great blog!

Could you imagine having sex with a ghost and then someone just walks in on you and sees your asshole widening and closing for no reason.

ohnnooo,
so you too, now you have discovered the most boring guitarist in the known universe....
in the past i came across at least three albums of this undergod, and.. well, being more boring than him is a real death race...

BTW, in italian MAZZACANE means DOG KILLER, but i think that the intyerpretation is that he kills them boring them to death...

nuff said, and i'm listening to a Live SCREAM album with Grohl on drums (seen them live a coupla of times and they were fantastic, Pete Stahl was one of the best hardcore singers, and Grohl girlfiend was a friend of mine, i mean, she still is but she did break up with the would become superstar), and for sure, i'm not switch to the mazzacae one!!!

Lilith...never underestimate the subversive powers of boredom.
But not the kind of Boredom that Dave Grohl exudes with ease.
Some of Mazzacane's albums are miesterwerks of isolation and despair...i suppose if you make 100 plus albums at least one or two have to be good?
I find most rock and pop mind numbingly boring....in fact, my lack of internet activity of late is a direct consequence of myself being bored with music,especially new music....can't see the point of it...either that or i'm depressed....again!?

"I spy Thurston Moore and Jim O'Rourke being name-checked in the credits, but don't let that put you off?"

You ask for impossible things sometimes.

Hey Doc, look what i have accidentally found:

Mota is an improvising guitarist from Lisbon who works emotive improvised magic from six strings with only the ghost of a Derek Bailey influence. Sings is a self-released album featuring nine solo guitar pieces – no singing – that have an up-close, intimate personality, tying up sighing melodies and cross-wired harmonics with gentle tweaks of string and the occasional blue note. Some of the more lunar playing here seems to pick up where Loren Mazzacane left off on his ‘big band’ record, Come Night, but Mota is even more involuted than Loren, his playing style almost a drawing-in as much as a teasing-out. Still, each piece feels like a full investigation of the guitar, fuelled by an inquisitive, exploratory logic that is just as open to straightahead tonal and melodic statement as it is to tying the whole thing up in a ball of twonk. Excellent.

(the comment is not mine, still i found it a boring listening, so i immediately switched to Keiji Haino..
tomorrow i'll answer your answer, have fun in the meantime!!!

Dearest lilith, the guitarist in question does attract my interest,so will investigate....never heard of him of course so kudos for that achievement. Check out Bleak Bliss for a 7 hour box set for one looong gig of Fushitshusha...spelling(?)....thats almost an average working day of Haino that may challenge your boredom threshold somewhat?