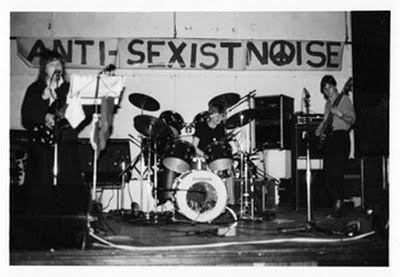 dUE TO THE OVERWHELMING POPULARITY OF THE pETTICOATS SINGLE POST, FROM THE OLD BLOG YEARS AGO. i BRING Y'ALL THE NEAR-LEGENDARY LOST pETTICOATS jOHN PEEL SESSION FROM OCTOBER 1980!
Now I realise that the caps lock was on, I will remove it, and marvel at the three tracks that were broadcast twice,and then lost forever in the vast vaults of the magnificent BBC archives. The sound quality is not hi-fi standard, but that was never the objective of Stef petticoats' solo band anyway.
She plays all the instruments, which is probably why she only managed three tracks in a day at Maida Vale Studios.
And to further enlighten you all to the mechanisations of Stef's brain, there now follows an interview with said lady, that she gave to No Class.co.uk in 2008:

What's your favourite punk rock song?
There are so many! I cannot decide. I think Patti Smith's Free Money was the first who blew my mind. Then The Sex Pistols, Ramones, Fall, Au Pairs, ATV, etc.

Can you tell me about any interest from major record labels?
Nothing received.

What did your family think of your records?
They were happy for me but at the same time worried over my financial future. Rightly so!

Is the world ready for a Petticoats revival?
Some people tell me yes, but I don't believe in a revival. I am surprised though, about the amount of fans I have, especially in the USA.

Are any of your old records still available?
The Petticoats single is. I am currently selling them to various record shops and individual people. A few Scaling Triangles are also around.

Will you gig again?
I sing in a soul choir and have gigs with them. I hope to do the occasional gig with my last band 69 Lies.

Do you remember the Androids of Mu? Are you still in touch with anyone from the band?
I do remember them. Their singer Corrina had the idea of the Making Waves compilation. I have lost contact with them.