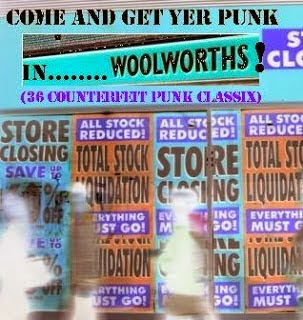 DOWNLOAD direct from woolworths HERE!
Posted by Jonny Zchivago at 11:57

I got this one from the archives of yesteryear. Your write-up for this is a crowning achievement for you and ought win a prize of some sort. I read it several times already and had to read it again today. Bravo. A good history / philosophy / psychology lesson on the spot.

Oh the plaudits! Of course as a real 'punk' I will have to refuse the prize,but secretly wish i didn't, and dream of displaying it in the largest window of my house.

Thanks a bunch for this - both the words and the "music" made me laugh. The funniest tracks for me (that I wasn't already quite familiar with) are the one by The Punkettes and Buster Gobsmack. If the Chipmunks version of a TP song could be considered fake punk material, then what about The Lettermens' take on My Sharona? (Part of a medley with Rappers Delight & Knock On Wood). Also there is that album by The Rotten Eggs titled 'Punk Nursery Rhymes' - I am not sure if this was released in the UK, but my copy is of NZ background. It also has a 'As Seen On TV' stamp on the front cover.

Jusr stumbled on this, what a quality bunch of tunes, worth the price of admission if only for the Norman and the Hooligans track, of course Albertos are always welcome

I had bookmarked your blog fucking years ago and got sidetracked by mental illness, good to be back online, at least the drugs are working!

Glad to hear the drugs are working, hope being exposed to this blog doesn't create new problems for you!?
I've had serious abuse for this compilation from 'real punks' for attacking their fav moozick....a four letter word tirade was launched in my direction for suggesting the Drones and Satan's Rats were fake.....which they obviously were. Maybe these offended punk rockers should be on medication too?

mate, back in the day, I was more punk than the punkiest punk, today I would suggest that I am just a bloke who likes his music. Satan's Rats were played regularly back then, Louise, You Make Me Sick, Year Of the Rats, come on, they were bloody good tunes ffs

My teenage years were spent watching and listening to all the usual suspects, but to say one band is more punk than another is just bollocks.

I really got into the Crass scene, something I notice you don't ally with, that's cool, your prerogative ... But I also really rated SMW and Fallout, the Ex ... the list is endless.

Then I discovered synths and got into Portion Control and the Cabs, fuck, I ain't a punk after all. My ethos is, it's a tune, I like it, someone else doesn't, so what.

I'm sat here listening to Emmanuel Top, thinking what's the problem, after all John Lydon likes the Bee Gees and Can, and the Small Faces. Is he not a punk???

Oh, the drugs, no they're not working, but the music keeps me going!

Satans Rats, yes they had some nice tunes,so do the Drones, but they were definitely groups formed after reading about punk in the daily mirror.
I was never really a 'Punk' myself, i always just liked Punk music, just as I like Jazz Fusion but I ain't got the funk!
As far as i was concerned Punk only became punk after punk had burnt out....post-punk/diy era may have more in common musically with Prog, but it followed the Punk Ethos almost to the letter.....one either went the sad sid vicious route and wore leather jackets for the rest of your life listening to the Exploited, or you retained your individuality and bought into PiL.
And the geezers who say they were punks when they were young these days act almost as if they had never actually listened to the records......I often find myself denying I ever had anything to do with it when one of them asks me if i was into the pistols when i was a kid......I don't think Lydon would describe himself as a 'Punk' either by the way.....even though he makes me cringe every time he's doing his housewives favourite routine on some piers morgan type show,seemingly every bloody week.
Anarcho Punk was essentially 'sid vicious reads a book' in washed out black.
Big Rudimentary Peni fan though I am....not exactly anarcho though?

Mate, I can't agree on the anarcho punk thing, Crass, Flux, Subhumans, all helped me make sense of my teenage years. I will say that I despair of them when you see them doing gigs for what I can only assume is financial gain and not to further their cause. I loved the first two things that Rudimentary Peni did, Blinko is/was as tortured as I am/have been. My creative juices are not in music sadly, I found that out when everybody was in a band, the band I was in were fucking terrible, nothing good about us at all. But it _was_ a laugh ....

Again, early PIL is brilliant, but I think Lydon has become a caricature of himself.

We talk of the above, I am not pigeon holing anything, I'm a lover of music, as long as it moves me in some way, to me it's good.

I draw the line at Steps though ...

Thank you for all the stuff on the Punxploitation section, I've been spending last nights listening and really enjoying it! This 'Woolsworth' is the best one, and the F.U.2 album is a masterpiece.

I've found some similarities between a few tracks here and more famous 'real punk' bands (but who are the punkiest?):

-12 Sniffin Glue-F.U.2. (STRANGLERS Get a Grip - keyboards)
-14 The Punk-Cherry Vanilla (SEX PISTOLS Holidays in the Sun - piano riff)
-16 Down At The Vortex-Yellow Dog (EDDIE & THE HOT RODS - guitar sound)
-23 Stitches(demo)-Alan Milman Sect (CAL Punk like BLACK FLAG Manimal or FEAR, and BEFORE them!)
-31 Matt Black and the Doodlebugs-Punk in Xmas (SHAM 69 What about the Lonely - the piano plays the same melodic line as SHAM' guitar)

PS Italians and English surely agree at least about one thing: THE FROGS.

Ha1 Italy, home of the Hitler SS and Tampax...repect.
I figure its an essential trait for Punksploitation records to have stuff that is stolen from 'Real Punks'.....in fact its a very Punk thing to do I reckon.A kind of early Plnderphonia.
Glad you enjoyed this comp as much as I enjoyed making it.