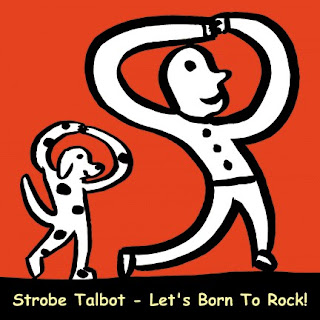 Basically, this is how to 'Rock!'....... in 15 easy lessons.
I say 'easy' because Jad fair makes it seem easy, but it ain't! Many have tried and this is why the work 'Rock' is now an utter embarrassment, when it is in fact the greatest musical form ever shat out of the arse of man and woman kind.
Its primal nature has been flushed away leaving the floating turd of 21st century rock'n'poop glistening on the surface in the crapper of meaningless entertainment.
You can't teach this kind of authenticism in those despicable 'Rock Schools' and Pop Music University courses, you've either got it or you ain't; and anyone who needs to be taught it, AIN'T GOT IT!
Its my Birthday today, so endure this charmingly untutored record and tell me I'm Right!

NB...three tracks feature cassette legend R. Stevie Moore on guitar.He was doing it himself as far back as 1969 for Chrissakes!

Lets Born to DOWNLOAD HERE!
Posted by Jonny Zchivago at 13:06

and thanks a million for all the interresting music!

This is Benb Gallaher, the drummer in Strobe Talbot.

I'm just writing to tell you that there is an alternate version of "Let's Born to Rock!" that anyone worth his or her salt will enjoy a lot more than this one.

I'll gladly send you those files, if you would kindly let me know of an appropriate destination.

Thank you very much.

All The Best,
Benb Gallaher

Well thank you Benb, an honor indeed. As you may have guessed I love your group. Would be 'stoked' to receive the files for the alternate lets born to rock. Just send a link to jonnyzchivago@yahoo.co.uk
Can't write too much as I'm out celebrating/mourning my birthday.
Cheers
Jz

Happy birthday and a 1000 thanks for this blog site. I always find something that makes me happy on it!
I

Happy birthday and a 1000 thanks for this blog site. I always find something that makes me happy on it!
I

"It's all bottom with you, isn't it?" (John Cleese) Happy birthday, thanks for sharing all the sounds

I constantly emailed this weblog post page to all my friends, as if like to read it next my friends will too.

Yes this is indeed the 'Alternate Version'...i fucked up somewhere!.....well spotted. Too much birthday beer.

The JNR one is way better, in my opinion.

Track listing for 'Let's Born To Rock!' on Joyful Noise:

B1. Nutrition
B2. It's Drinking Time
B3. Riverflow
B4. Music Of The Horn
B5. Love Earthquake
B6. Tick Tock

If it was my b-day, I couldn't imagine a better present than this. Well played.

A question for Benb really ... I managed to liberate copies of both of these releases ... I believe at least Mister Hobbs has a copy [or copies] ... having failed my miserable self, couldn't he/you effect some sort of détente between Jad and Claire (in either Scottish or French mode) @ mrw so that the copies held hostage can be disseminated freely? ... well, at someone's cost ... cheers

"Détente" implies that some frost needs thawing. To the best of my knowledge, there's no frost, but I'd be happy to ask about it. (How'd you get yours, if I may be so bold?)

I had merely thought that the label hit a bad patch at just the wrong time, which dovetailed with unnerving precision into the bad luck that we were having as a group. (Just after this, another label declared an enthusiastic intention to release it, just before the proprietor's partner was diagnosed with inoperable cancer. Meanwhile, my just-diagnosed Multiple Sclerosis resulted in paralysis of my left side.)

It's a mysterious iteration of the record — I had a box of 25 that vanished.

It was mostly the production and some other nonsense that bothered me about it. I found the production to be a bit 'trendy', dismissing the alchemy of the live performance by putting fuzz on everything, making it less exciting than it had been naturally.

The JNR release fixes that in many ways.

Thanks for asking about this!

Thanks Benb ... sorry to hear about your illness any inference of ill will that might have caused distress ... I bought Let's Born To Rock from someone on eBay who ... "bought in the second hand section in Monorail in Glasgow ... I had no idea it hadn't been issued. Would've charged more if I had :)" ... Haunted House was from someone on Discogs (my want list) ... the seller told me it was one of two personal copies, one given by Jad and one Gilles

Don't know if this is the place for maybe sensitive correspondence ...

Mainly from Jan-Feb 2011
Jad: I've [also] sent several emails to the MRW44 address and haven't received a reply. Yes, MRW44 did make some CDs, but I [was?] never sent any accounting for sales. I only have one or two copies. I think Mick Hobbs still has some copies of the Strobe CD and Gilles Rieder has copies of the Monster Party CD.
Claire: Sorry for delays, I have a lot on my plate and been putting off dealing with this, I don't have them here and I'm not able to sell them I'm afraid (not at the moment anyway!), they were never probably released, long story, could you pass on Jad's current email address please if you don't mind, or ask him to get in touch with me.
Claire: I have been speaking to Jad to try and sort something but it will take some time ... it's out of my hands at the minute ...
Eventually ... Tue 07/06/2011
Jad: I saw Claire last week in Glasgow. She offered to sell copies to me ... [I] decided not to buy any from her.

Not to worry, and your message did clear up some confusion, by clearly articulating the confusion. A old friend of mine called this sort of thing "Confusionism."

And my illness in in remission, meaning that I can play drums, which is what I most like doing. Mick's coming in June, and we will be recording amply.

(this is my wife's email address, by the way. i neglected to sign out. confusionism)

Whats all this? Friends Reunited.com reborn or what?

Thank you. I agree.