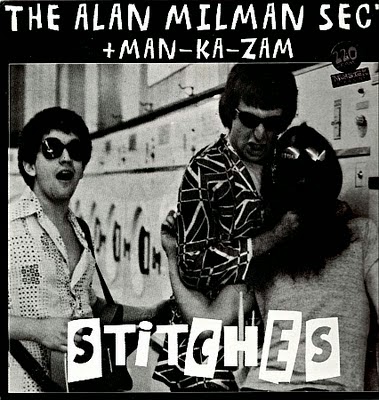 Here is the career anthology of the stratospherically brilliant Alan Milman Sect. Famous for one of the best three Punk Rock singles ever made....yes i refer to the great "Stiches/Iwanna Kill Somebody" track.

I think that charming couplet sums up nicely what you are in store for on this near-legendary two minutes of brain exploding punk rock thuggery. Which is really two tracks seamlessly glued together to form the most perfect punk tune ever invented. Aggressively offensive,and totally non-P fucking C

Near perfection is this record, Great Band name,great band photo, great songcraft,musicianship,great performance.....i could go on.Hey why don’t you hear it for yourself?
But, what are the other two greatest Punk Rock singles ever, you ask?
Obviously, The Users "Sick of You/I'm in Love with Today" and Some Chicken's "New Religion/Blood on the Wall". Didn't you know that?
This is the best American fake Punk Group, by miles.So do yourself a favour and download their career overview.
I know this is gonna bring forth a torrent of incensed punkers telling me that I don't know what I’m talking about.I'm glad to say I don't, and nor should you; for therein lies the essence of pure Rock'n'Roll. Feeeel, don't think, and Punk Rock yee shall make.

This is on Alan Milman's own Bedazzled Label, which was the name of his post group record store in Seattle,where he still resides.
Some of these tracks were released as Man-Ka-Zam......but we'll forgive that faux pas and pretend that it never happened.
Enjoy!

Mate, you're on fire with this recent run of posts.

Totally agree with you about Users and Some Chicken, but I don't remember ever even HEARING about Alan Milman Sect or The Mentally Ill before. One thing about the AMS - brilliant though 'Stitches' is, with classic ein, svei, drei intro - the drumming's a bit competent for a DIY effort, isn't it?

Point absorbed Neil, and I have to say it is correct. Remember that these chaps were real musicians, and had a slightly tongue in cheek approach to Punk rock. That aside, and the competent drumming,the Track stitches/kill somebody,achieves a rare level in Punk Perfection, pour moi!