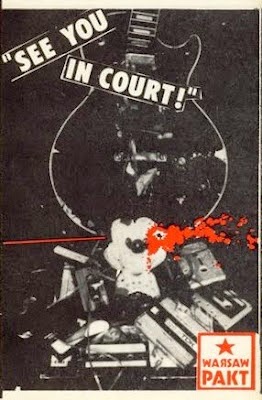 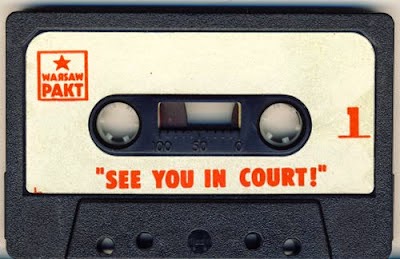 Pub Rock was a very satisfying early flowering of the DIY ethic. If you didn't like Led Zep, Mike Oldfield, or ELP in the mid-seventies you had no option but to do it yourself, if you like high octane unpretentious R'n'R.
Some reckon that Warsaw Pakt were a punk rock combo, but I don't hear that on this high speed amphetamine fuelled collection of studio demo's and out-takes from their fantastic 'Needle Time' LP from 1977.(Which got in the charts for one week before inexplicably being deleted by Island after selling 5000 copies in a few days(Mmmmm the 'Entertainment Industry'????).I assume they were still contractually obliged to Island in 1979,who refused to issue any more stuff from the group,so they released it themselves, hence the title?
Record companies?Fuck the lot of 'em!
Tracks:

DOWNLOAD and i'll see you in court HERE!
Posted by Jonny Zchivago at 23:42