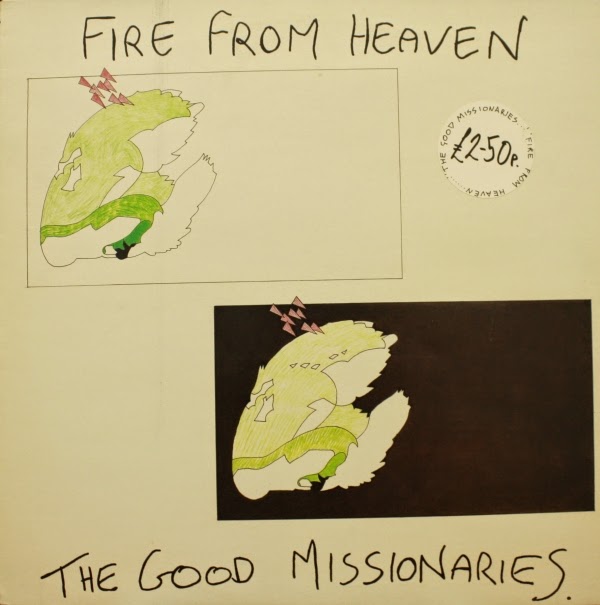 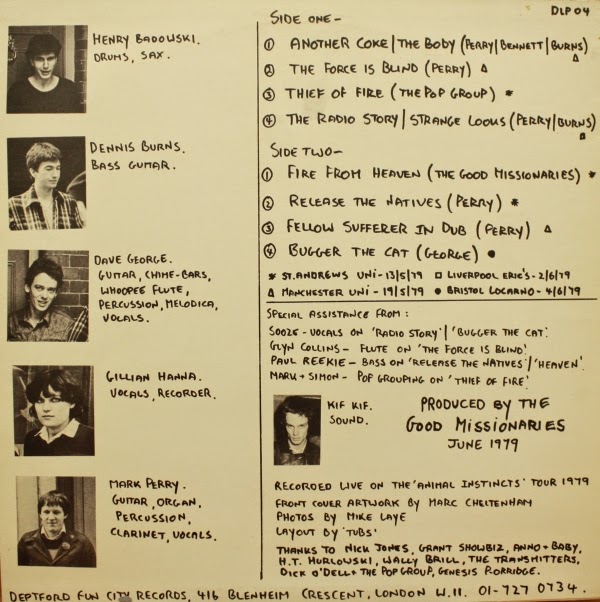 mmmmm......Punk Rock........that's a funny one.
Don't wanna get on my High Horse,but, one has opinions,and i'm gonna air them.
Am I wrong,or was 'Punk Rock' about rejecting the old order,and to strive for creative and personal freedom?
This 'personal freedom' may include having a Travis Bickle haircut, wearing expensive leather trousers,biker jackets with 'UK Subs' painted on the back,and generally to be in Discharge; but,this,to me, seems like an intellectual dead end.
Alternatively,one could try to sound and look as little like the Sex Pistols as possible. This route represents an honest attempt to follow the original concept of the movement,and that is, not to follow movements, turn at right angles to the flow, do the opposite of expectations.
"Action,Time,Vision."; ...good '77 style punk rocker anthem right? What do normal celebrity seeking pop groups do?....Yes,"Action,Time,Vision,part deux",then trois etc.....then you're a star.
If You wanna be a rock'n'roll star, endlessly repeating yourself,almost guarantees stardom. This despicable route is well trodden,and has most effectively een used by the uber-despicable U fucking desperately awful 2.
We could have all been wearing ATV t-shirts by now,but no,they decided not to do what 99% of punk rockers tried to do,and go in a totally non-rock direction.
De-constructed versions of ATV classics sit side by side with free-form versions of the already free-form tunes on "Vibing Up The senile Man" .
Beef this up with the odd improvisation,as the band swapped instruments to keep the technique rudimentary, to avoid being accused of the terrible sin of 'Musicianship'.
Coupled with a sartorial dress sense that made the Subway Sect look like Spandau Ballet, and you've got yourself a genuine forward looking 'Punk' group; although in the true sense of it all, no 'Punk' group would ever call themselves a 'Punk' group!
This recording represents an artist at the very peak of its near-misanthropic capabilities of alienation; which exposed the psychotic,needy, nature of 'Fans', who seem to think that the artist owes them something; and should only deliver the 'popular' tunes; which is as unhealthy in pop music as it is in politics.
"Fire From Heaven" is an obvious reference to Mark Perry's interest at the time in the free jazz of the sixties,like Archie Shepp, who's album "Fire Music" explains how these 60's New wave Jazzers attempted to channel music from a higher place, by intuition rather than intellect.This concept is definately achieved effortlessly by Mark Perry's post-punk era collective; fire from Heaven indeed!
Among the many sonic highlights on the god-like disc,we are treated to a shambolic version of the Pop Group classic,"Thief of Fire", with the one and only Mark Stewart guesting on vocals.

As headlining act on this tour (the Animal Instincts Tour 1979),The Pop Group were very used to disembowelling their own work; so to do it with the very unpopular support act, wins them the highest possible Die or DIY inspiration award.

Download Fire From Heaven Here!
Posted by Jonny Zchivago at 19:44

Excellent screed, Jonny.
Great stuff, I only had the "Deranged" 45.

Every word is true. I remember when C&A started selling bondage trousers. Not many saw the irony of that...too busy milking the cash cow dry. And, don't get me started on the "Ultra Authentic" anarchopunk followers who made people's lives a constant misery because you didn't wear their uniform and thought nothing of slapping the good lady when they got back home. ATV / Pop Group / Mark Stewart were the real deal. They were pilloried, which in itself is a good thing because those that needed to be treated with benign contempt identified themselves and you didn't have to go to all of the trouble of weeding them out.

The Pop Group were pilloried!? You sure about that, badgerstump?

Not pilloried in the music press No.; but you ask yer average 'Punk' in the street what he thought about The Pop Group, ATV, PiL etc in 1979,and you would not hear glowing praise.

Ever taken your cues from the average 'punk' in the the street Jonny? Me neither. The average 'punk' in the street was just another fully-qualified member of the 99% as far as I'm concerned. Mark Stewart or Mark P. were (still are) two of the most clued-up people in England and they wouldn't have recognised either of them. To paraphrase Sid, I've met the man in the street, and he's a cunt.

As for C&A bondage trousers, don't recall seeing those but like you I well remember their faux-mohair jumpers hanging on the rails!

You have a great blog here Jonny (but you knew that already). Thanks.

With a bit more healthy interaction from you lot, it could be even better here.

You are right, i've always ran a mile from your average 'punk', especially if he was a Sid clone. Although the Sid quote you paraphrased,is probably the only uttering he ever made that was praiseworthy.
Obviously made after he was on the smack; before that he never said boo to a goose (unless he was drunk,-sid not the goose!), and was disturbingly well spoken.
'The worst kind of rock'n'roll idiot', to paraphrase Rotten.

'The worst kind of rock'n'roll idiot', to paraphrase Rotten.

I'm afraid to admit that I was a man at C&A ... there were bondage trousers!