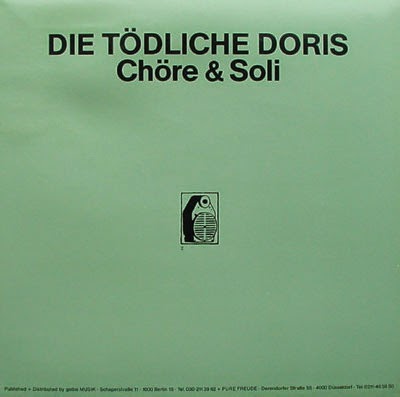 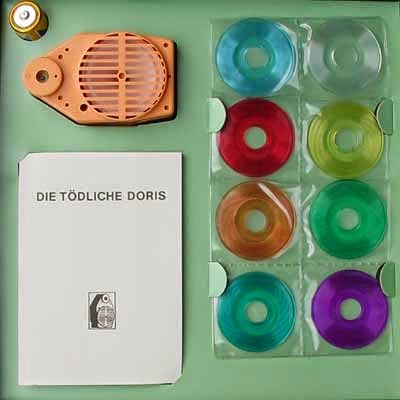 Never ones to shy away from a conceptual art statement; Doris produced this box set which contained 1 book, 8 miniphon records and 1 battery driven device to play them on. Each disc contains two short tracks;which are very short acappella songs, the German texts of which are printed in the booklet, where they are also parts of a story illustrated with photographs.
The songs have the quality of some long lost childrens programme from 1950's DDR. Producer of such kiddies classics as "The Singing Ringing Tree", which used to haunt my childhood. I still think of that German speaking dwarf with dread!
The device included in this box was exactly the same pink contraption that was in those 'laughing bags' that also haunted my childhood. I still know every note of that horrific laughing sequence! This thing used these same little miniphon records to replay the laughing, and its this playback quality that gives these spooky little recording their weird nostalgic vibe.
Not something you'd want to play over and over again, but really a beautiful piece of conceptual art.

Believe it or not;there was also a live performance of these works:

Lengthier versions of the tracks are performed in front of an obviously amused audience,with some sparse accompaniment.These versions have titles,which, if you are really sad, can match up with the original versions?

You are performing an inestimable service with the posting of these recordings!!

Wot Antz sed. We are very much obliged to you.

And I,in return, am obliged to you both for this rare appreciation.

Yeah ain't they just fab?
6 mins is correct for Chöre & Soli...can't get much on those kiddies toy discs. My laughing bag disc only lasted about 30 seconds back in the 70's....before it got confiscated at school......no fun.