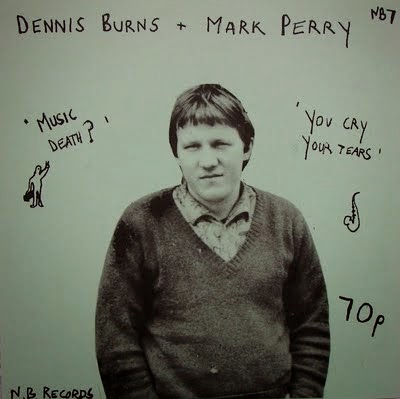 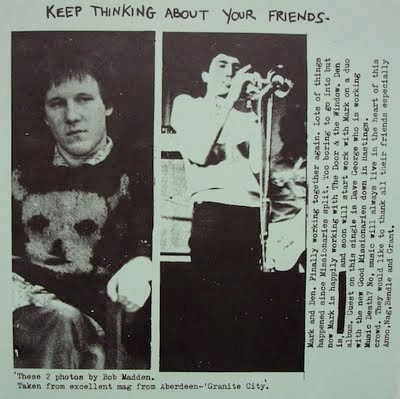 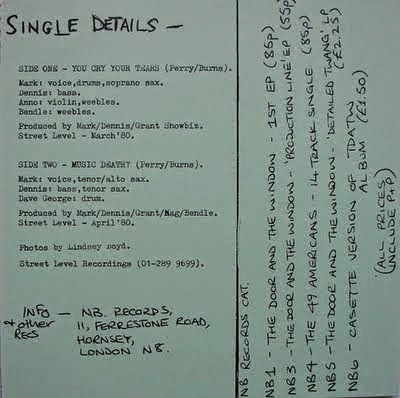 Just have a butchers at that photo of Mark .P on the sleeve of this single. The mirror-image of a 'Popstar'. Slightly chubby, dirty old school jumper,looking miserable,diy haircut,hands in pockets.....its enough to give an A&R man an anxiety attack. The A&R man continues: "They can't sing,can't play their instruments,its not a proper recording,and the songs aren't happy enough.".....wrong on all counts mr. Fictional A&R man,you're gonna lose your job soon anyway when your poxy record company goes bankrupt. And when they do i'll play this single to celebrate; fucking cultural fascists that they are. This single is from an honest place, its folk music, its real,and Bendle and Anno play...Weebles???...on it? Are these the egg shaped toys that wobble but they don't fall down?......if John Cage incorporated Weebles in one of his conceptual pieces with prepared piano,we'd all be praising his undoubted genius; but because its Mark "school of the streets" Perry, this innovation is forgotten.
But, its no longer forgotten,as its a work of great power and charm, which exists in its own bubble in space, deserving, but not asking, to be loved......so love it!......and then check out the Mark Perry solo album.

Download and Cry Your Tears of joy for a lot less than 70p HERE!
Posted by Jonny Zchivago at 14:30

Wonder if he still has the Mclaren/Westwood skull and crossbones jumper he's sporting? Be worth a few quid now, that's for sure.

Now, if C&A made a nylon version of that,i'd have asked my mum to buy it for me.