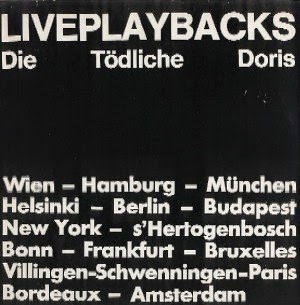 Can't be arsed to write anymore about Doris, so i've cut'n'pasted the sleeve notes to explain the rather novel (again!) concept behind this jolly good LP:
"Live meets Playback: The group played every title live only once. For the following concerts, The Deadly Doris used the recordings as a playback tape, to which she only pretended to play. From this a new recording emerged, in which the old Playback combines the applause and sound of the live audience. The method was repeated again and again, so that one can discern by the last title the sound of seven auditoriums at the same time. The actual music exists only as a crazy and blurry noise. "

DOWNLOAD once then play it back HERE!
Posted by Jonny Zchivago at 08:43

The song titles may even be superior to the sonic product itself.

As with most art concepts, the Idea is often better than the final product.In the future we will share only thoughts.