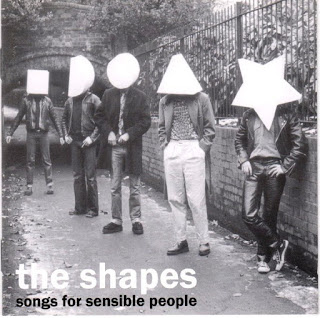 The Shapes never got to make a proper LP, but there was the obligatory CD compilation churned out in the nineties.
There's alt versions, demo's, outtakes, studio chit-chat, but nothing 'Live'.
Apart from two versions of Sexist classics, "Wots For Tea Mum?" and "College Girls,there's a quaint tune that makes light hearted ,and very seventies, fun of paedophilia.Also included is the Punk  standard,as in the tune that slags off ones home town...in this case the posh Warwickshire town of Royal Leamington Spa.

DOWNLOAD the shape of things now gone HERE!
Posted by Jonny Zchivago at 13:33

Oops - I suggested earlier that one of the Shapes was the instigator of the TrakMarx website but my 15 year-old recollection was Wrong Wrong Wrong! (Hangs head in shame).

It would be rather more accurate to say that Jean Ecoule who ran that site was a big fan of them, saw them play loads of times etc, hence this retrospective interview in 2003:

"In the end, the mystique of the bands like the Fall disappear somewhat after you've seen Mark E Smith in his underwear eating chips".

Why was this quote not used in any of the MES obituaries?

Thanks a lot ; I like this band very much yet somehow I missed this compilation

personally i'd never heard of Trakmarx...and why should I?...but but an entertaining interview with former shapes was read......quote about MES is a classic.Better seeing him in his underwear back then than a few years ago i should imagine.