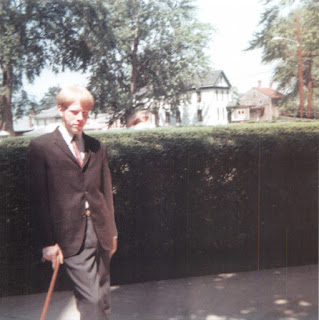 Its Jandek Monday, and this is "Dublin Friday", for the simple reason that someone asked for this because they were 'there'!
This is my equivalent of 'playing for the kids'. That brown nosed gesture a lot of performers do to please the crowd by playing their greatest hits or, as in this case, requests.
As i write, Jandek in Dublin is playing, and he just exhaled the line, 'The Cacophony Of Gesture', which i think places brackets rather cosily around my sycophancy.
Something Jandek never does, but of late he does ,unintentionally ,occassionaly, gives them what they want.
Live at The Douglas Hyde Gallery, Dublin,  June 13, 2008, the representative gives the 'kids' classic old school Jandek; without any hanger-on avant garde musicians to ruin the beauty. Meandering detuned ascoutic guitar, and stream of consciousness vocals under the working title of "He Said Nothing";of which there are eight long parts.

'He's just making this up as he goes along', they say....well......yes, thats usually how the creative process occurs. For me, as well as our esteemed Corwood representative.
There's some polite applause, art gallery style, from the audience in between each part. One can only imagine the modest crowd sitting in silence for each 8 minute part, staring passively at the spectacle in front of them;some feigning an intellectual connection with the ginger one (Check out the keen applauder who clapped the longest after part eight!...Lol!). Mostly waiting patiently for,an end, thee end,any end. Trying not to check their wrist-watches,or be seen to leave early........a bit like life?......very Jandekian.

Thanks! I'm gonna see if you can here me come in late & run down the stairs.
There was about 80 people i think? half of the dublin music scene was there. some groaning in their chairs.
It was oddly surreal as there was a camera crew circling around the audience for what felt like the entire show. I might have to pick up the dvd version and remember.
the Gallery had a show of his album covers on in the small gallery around the same time.

Yeah, I always thought Jandek album covers would make a great exhibition.....I've not heard any late comers as yet on this one....thats unidirectional microphones for ya.

I forgot they made a book for the exhibition http://www.douglashydegallery.com/bookshop/jandek
thanks again!

I think it's those covers,along with lines like "The Cacophony Of Gesture" and just the entire concept surrounding Jandek that keeps many, including me, intrigued by the guy. I can't speak for what others hear in the music. With the exceptions of the album you posted on June 10 and the later live things like this, it's not something I choose spend much time with. Still, I've ordered a few of them. I pick them up when I see them used. Perhaps I'm being played, but it is my own decision, isn't it? Beats American Idol-style pop-spew eight ways to Sunday, or in this case, Friday. If it clears a room, I'm interested.

Me being an unapologetic mysanthrope is always interested in something that clears a room (Wyatting as its been named!?)......Jandek never fails...except the odd live album of his.....always when he's solo.
I might steal 'The Cacophony Of Gesture' as a title for one of my pieces.
When he's live and sol, the albums are not far removed from his home recordings, which i'm sure are done in one take as live,so there's little difference between Live in Dublin and his classic works in executiom......just there's an audience....which spoils the vibe....its less intimate.