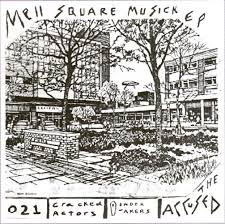 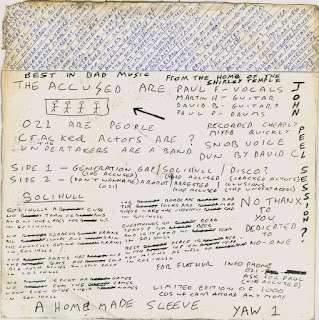 The word 'Classic' is used as often as 'Genius', but I think at least one of those adjectives apply here.
This is classic UK DIY at its very worst/best; touching on a certain genius that lies within everyone if they had enough insight to find it.
This is music made by real people, for real people.It goes against all the accepted norms of Rock music.This just doesn't get taught at those Rock'n'Pop schools that are springing up everywhere. This would score zero's marks in the end of term exams at the despicable 'BRIT' school.
As you may have noticed, we have now moved geographically and socially back into the rougher parts of Solihull area on the outskirts of Birmingham, away from the smarter parts where Swell Maps came from.
As previously mentioned in the Swell Maps posts, the Maps were obviously middle class, to put it politely.
The Accussed ,however, were equally obviously NOT middle class,but they were indeed also from Solihull!They even made their dislike of Solihull in the charming ditty "Solihull"......"I thought Solihull was for Snobs but these punks think different" says the intro.....then its swiftly downhill from there!
The Accused, have the distinction of being probably thee most incompetant combo of the so-called 'punk rock' era....and that's saying something! They appear to have no sense of melody, timing,or expertise on their instruments.
There was a famous quote to describe the music of Jandek which applies almost perfectly for The Accused....I've just replaced the word jandek with said brummie Punk combo.
"How to describe the music of The Accused (Jandek)? Like most amateur rock critics, start by comparing (them) to the Beatles. Then strip away melody, catchy hooks, rhythm, and harmony. Next toss out vocal and instrumental ability, along with any trace of human feeling . Aside from these deficiencies, (they're) exactly like the Fab Four."......a bit harsh on the Human feeling bit, but on the whole, accurate.

The Fab Four of DIY.....a new kind of anti-genius.
The rest of the groups aren't much better, but thank any one of those fictional religious entities that they scraped together the three and a half hundred quid to make this e.p.
The Cracked Actors were obviously school age Teens, like a Brummie version of the Prats.
The Undertakers don't sound much older however.
The 021,named after the Birmingham dialing code, make an excellent de-rocked version of this Punk Rock music fad. They could have been the Clash if the singers dad had been a diplomat. In fact they sound not unlike some of The Clash's early tunes,like that one about not understanding flys?!I heard a Clash bootleg from a 1976 gig at Birmingham Barbarella's, and they sounded exactly like The 021...but then they sold out....unlike The 021...(not to be confused with Kif Kif's equally excellent group The 012)

DOWNLOAD some square musick HERE!
Posted by Jonny Zchivago at 10:00