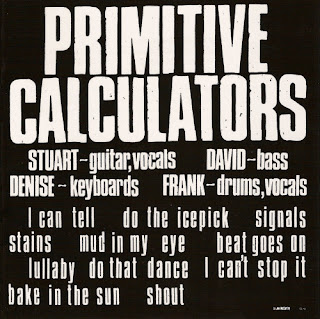 Down in the classier part of Australia, we find the Synth Punk stylings of the Primitive Calculators of Melbourne. Home of The Birthday Party, formerly The Boys Next Door, whom The Calculators supported the night this live LP was recorded in 1979.
Of course The Boys Next Door contained one gothic crooning bore, Nicholas Cave, and we will hold that against them.
As the years have slipped by, we now know that The Primitive Calculators were,and are, vastly superior to any of Cave's future combo's.One reason why being decended from convicts is not as bad as its made out to be,as long as one leaves that curse of the inferiority complex behind with the other rubbish.
No studio LP was preserved for use in evidence,so we are left with a single and this live magnum opus to argue the case that they were the worlds largest islands equivalent of The Screamers......who needs recording studios anyway?
Like memories are the best photographs,sometimes things should be just left in the moment to burn brightly and then die.....which, ironically, the Calculators weren't allowed to do, as they resurrected themselve in the late eighties,and recently released a new LP??? for fucks sake!......yeah lets fuck up our legend like every fucker else is doing these days.
A lot's to be said for early deaths in the pop world. Jimi Hendrix was just beginning to suck real bad when he choked on vomit, and a lot lesser lights would have been thought of far more fondly if the reaper called just before that difficult second album.......Bono excepted of course;that particular gnome was beyond redemption as soon as he sported his mullet and placed a pixie boot on the monitors for the first time.A fine advert for abortion. 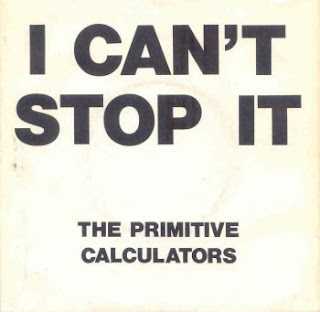 DOWNLOAD the lp and something you can't stop HERE!
Posted by Jonny Zchivago at 00:19

The Screamers - from Los Angeles that's in America

Primitive Calculators two recent LP's have been useful, middle aged gripers tonging those that need it. is worth checking out

One of the high points of the Primitive Calculators was the fact that they hated the Birthday Party and Nick Cave. How cool is that. Sadly Nicky boy is regarded of some sort of god here in Australia. Also I suggest you try and check out a doco on the underground music scene in Melbourne from 77 till 81 called "Living on Dogfood".. Well worth a look. First the Slugfuckers and now the Primitive Calculators. Thanx again. These are indeed glorious times inwhich we live.

First there was the appearence of the Slugfuckers. I was very impressed. Then I mentioned where are the Primitive Calculators? BANG. In a flash there were the Primitive Calculators. Incredibly impressed. So from far off Post Punk Melbourne circa 1978 I suggest → ↑ → (pronounced as three clicks, often written incorrectly as Tsk Tsk Tsk or Tch Tch Tch). Brilliant name. Weird band. Sadly long forgotten.

Jeez Mate, this is turning into a blahdy request show!
Just so happens I do have some '→ ↑ →', or Tsk Tsk Tsk......so I'll put that up next instead of Systematics. Its Grego's fault for trying to out obscure me.....its the australian in me, over competative!

Of course you don't like Cave. Ha ha. I'm a Rowland S fan really more than the rest. I have the same birthday as him too which I only found out years after I got the gay for ol' Rowlie. People are stupid when they complain about bands never 'properly' recording a studio album. The Screamers stuff laid down is gold and stands up to if not knocks down most all their LA ilk whom floated in and out on payed studio time. I am going to spit on the next person I hear say 'its too bad the screamers never recorded an album' or gob... thats what you say yeah or was that just another maclaren invention? Sorry I got nothing but lack of sleep. I will listen to this now and fap myself to the dreamtime. Still not sure what that means but I am really excited for this one honestly. Only heard of never heard. Humbled. Thanks lover. Crikey!

Ideed, Cave....in fact Cave fans!....groan. Like Fall Fans, Cave Fans have this great simmering pride, barely beneath the surface, when they announce to an uninterested public that their favourite pop singer is Nick cave. They are usually the most insipidly ordinary fucker who use this fact to make them seem more interesting........now if they said they like the Screamers, that'd be very different.