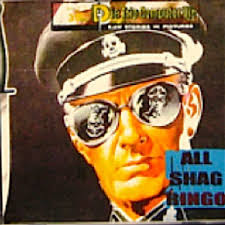 In the grand tradition of Die Computer Trip Die,I've plundered a recycled review of this great ,very privately released record in a language I can't understand, by a member of the public on some forgotten web-site., somewhere out there; and Die Trip Computer Die are certainly very 'out there'; as deliberately obscurely as anybody has ever been.......to sell-out a little, i can reveal that this is distantly Homosexuals related, so you now know that its very good indeed......if a trifle smart-arse,but the 'Good' kind of smart-arse.
Take it away Fabio R.......:

DOWNLOAD to be well and truly shagged by ringo HERE!
Posted by Jonny Zchivago at 13:46

I think he means:

"Enigmatic, intricate, colossal experimental trilogy of ever put on the market that of Die Trip Computer Die, in three torrential satellites 'stream of consciousness': All Shag Ringo, obtained by weaving with patience, skill, intrigue and household flair, an infinite number of sounds and visions, dynamic forms and processing waste.
You get a ‘monster’ collage D.I.Y. in absolute structural freedom, including samplers, improvisations, environmental immersions, psychedelic takeoffs and bewilderments, spatial routes with ubiquitous milky filaments of keyboard to weave and reveal metaphysical realms and celestial visions. All this is done ‘reacting’ with shreds of sounds, disfigured and terrifying average emissions, alien-daily with a mnemonic and unsettling effect. A disturbing and somewhat unheard-of relationship is generated between elements arranged, with rigged joints, of evocative and arcane forms recalled.
The date of realization remains uncertain, lacking any mention of it. Someone mentions 2002, but these montages may have descended into the 90s, despite undoubted commonalities with The Orb landed in the California of the absurd of LAFMS, or the collagistic ability, loyalty and imagination, daring and ardor typical of the recent, shrewd generations of electronic artists."

You're doing God's work.
In the secular sense that is.
Don't stop till you've had enough.
Thank you.