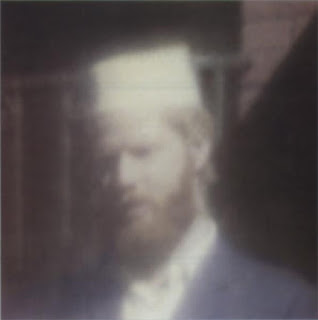 Did someone mention Jandek?
As outsider music has reared its less than beautiful head on recent posts,I have an excuse to post some 21st century Jandek.
DISCLAIMER: Stictly,Not recommended to those of a nervous disposition,prone to suicidal thoughts, or gun owning social outcasts or loners with a gripe about society who live near a school.
This Diamond in the mud is one of his first 'post-live performance' albums, and features our hero in the first of a series of photo's featuring Jandek,somewhat provocatively, as a ginger Muslim on the cover.
His 21st century studio output has been overshadowed, sadly, by his emergence from the shadows to perform 'Live!?'; with other ,'proper', musicians!? Making Music that one would expect to see on a proper record label! A Shocking sell-out, or just enhancing the 'Jandek' legend,and/or myth.
This CD is classic Jandek however. Utilising his unpatented detuned bass strings method of aural torture.
Vocally and Lyrically he is in top unacquainted despair form.Very much the musical equivalent of slowly slitting ones wrists in a cold bath and welcoming the peace of death with open bloody arms.
This could clear a warehouse party with everyone on pure Ecstasy and Nitrous-oxide in less than 5 minutes. Laugh I almost cried.....or more accurately, Cry I almost Laughed; which is the eternal paradox when someone first encounters Sterling R. Smith's alter-ego.Its a strange mixture of Hilarious and Disturbing.

I've got loads of this stuff already featured on here....and more in the can!? So i propose a 'Jandek Monday' approach, where I will offer up a new Jandek album to ruin your week,every Monday......and there's loads of 'em too!

DOWNLOAD if you're happy but crave the highs of depression HERE!
Posted by Jonny Zchivago at 11:47

I love his live electric stuff (thank you Volcanic Tongue!), still undecided about him overall though, so this is a very welcome opportunity to listen to something else. Thanks very much!

i download pretty much every jandek record posted here, so yes, i need more!

Luckily for you, its "Jandek Monday" today!

Thank you so much! The Bass records are my favorite.

…and I bought nearly every Jandek cd thanks to your fantastic blog.
Thank you Nick,
best, Michael

The above track is missing!