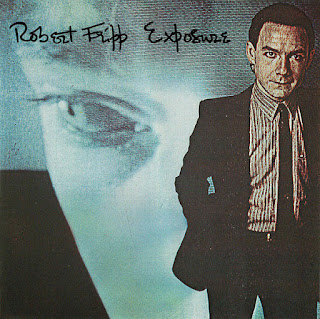 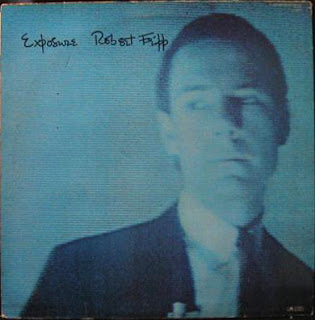 Back to the theme of the Prog influence/infiltration on Post Punk. Who better to start with than thee arch-prog experimentalist on the six string,Robert Fripp.
As a teenager, brought up on glam,a bit of prog and the new wave, I always wondered who this smart looking gentleman was who was always pictured in the music press. One was very impressed at how out of place he looked, like a stockbroker who'd accidentally stumbled into a music store. He was often seen with Eno, who used to be in Roxy Music,so one knew who he was, therefore the conclusion of that was that this Fripp chap couldn't be all bad. I had heard of King Crimson,but didn't know he was in them, so hearing this unusual take on rock music was a revelation to someone who thought The Ruts were a bit too good on their instruments for their own good.
Fripp,was and still is, my favourite Guitarist, and the most 'white' by far.You won't find Fripp relying on Blues licks to flesh out a tune.Unusual time signatures, and fractured riffs, coupled with some ambient sustain driven Frippertronics, make his style hard to pin down for more than five minutes.And the fact that he insists on playing while sitting on a stool,scores the highest anti-rock points currently available.
This album is a kind of Prog super group album, with that other great forward moving dark-progger Peter Hammill of Van Der Graff Generator contributing some vocals and lyrics, and various Genesis chums Phil Collins and Peter Gabriel contributing the stuff they do best.
There is but one faux-pas included here.....Darryl Hall!!!!..but we can overlook that can't we?
Of all the progressive rock bands,it was probably these luminaries who absorbed the Punk message the best,and produced something new from it,in sync with the rest of the Post Punk/prog brigade.
This era of Fripp,also produced one of the great images of all time, up there with Doctor Feelgood, and the Magic Band.

DOWNLOAD for some decent exposure HERE!
Posted by Jonny Zchivago at 20:11

exactly. i saw KC play one night,double trio version, and he sat in the center, farthest back, on a padded stool. one side of his long shirt was accidentally tucked under his butt. it stayed under there the whole 3 hours. he had never even fidgeted!

thanks for the Exposure...

Is there any Bill Nelson in the future?

Fripp trivia: he once sent back a gold (or maybe silver) disc because it was awarded to "Bob Fripp" instead of "Robert".

I would have sent the fucker back too...the cheek of these hippie record executives!........Bill Nelson?....I may manage some Red Noise?....not a fan otherwise,but since when does that stop me?......Fripp is actually very funny.

I saw Robert Fripp guest on two performances with--I shit you not--Hall & Oates. New York City Avery Fisher Hall, 1979. Roadies pushed his throne/chair/studio contraption onto the right side of the stage, and Mr. Fripp proceeded to add his unique and indelible whatever to a pair of the duo's radio friendly pop soul confections. I've no recollection which songs he performed on, I was just basking in the glorious absurdity the moment.

Yup. this is a good 'un, the only Darryl Hall I have in my collection. Good on RF for sending back the typo'd Grammy. The least they could've done was get the name right.

Ian, I would like to know what you were doing at TWO!? Hall and Oates performances! One could happen by mistake but two? Don't suppose there are any recordings of this event?

Thanks, this is great, haven't had chance to hear the expanded version up until now. Red Noise? Any live stuff would be good especially (for me anyway). cheers Jonny.

Weirdly, the Daryl Hall solo album that Fripp also produced around this is time is _kinda listenable_. I mean, it's certainly not great, but a few of the tracks _aren't bad_. Shocking.

That said, the Peter Hammill version of "Disengage" is insane, and obviously vastly superior--as is everything Hammill does. But the Hall version is alright.

For the record, I do NOT have the Daryl Hall solo album--I listened to it on youtube.

@Jonny Zchivago:
Clarification: one show, two SONGS performed on at the show. My brother was a member of the music press at the time and was there to cover Ellen Foley's opening set for a piece on her. If there are any recordings of Mr. Fripp's cameo I haven't seen them. I do remember standing next to Ian Hunter backstage, astounded by how tall the fucker was. He was chatting with someone about having seen Tuff Darts the night before.

I have a confession, I do have the Darryl Hall solo album, damnit! I probably got it after all the hype RF made about RCA shelving it. It may be very good as DH albums go, just not my cuppa tea tho'.

Thanks for this, never heard it before. I always liked my two League of Gentlemen 45s. What do you think of them? As to Hall and Oates, did you ever see their funny appearance on SCTV?

Plenty of League of Gents coming up,after plenty of Frippertronics.

If this is the CD reissue, it's a different mix than the original album. I can't recall all the differences but do know that there are a few extra lead guitar lines on "North Star" that made it into this mix but were mixed out on the original LP. I have both.

Its from the CD re-issue of both mixes....i used the original mix.see no point in having anything other than.

I wish I could be as cool as all you guys with your snide comments about H&O. Any tips on how I can achieve such lofty status?

Ah, a lovely world where everything is beyond criticism. I wish I could be as open-minded as you with your snide comments about us 'cool' guy's snide comments about some terrible blue-eyed soul duo. That makes you instantly 'cool' and and already the owner of a loftier status than thou.

Keep wishing fuckface. You'll never get there, but some of us enjoy watching you fail miserably. Repeatedly.