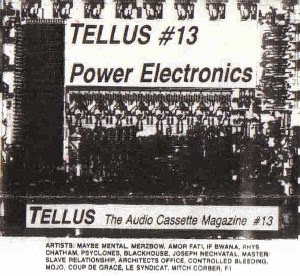 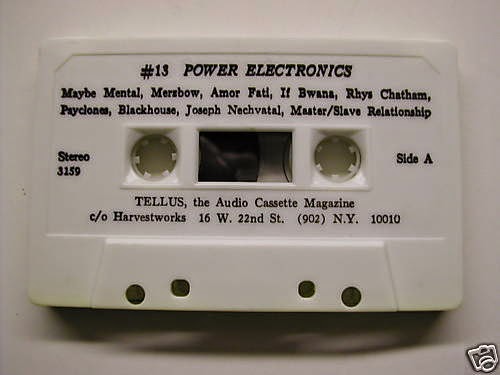 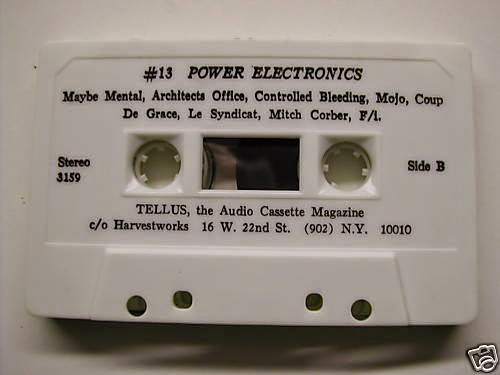 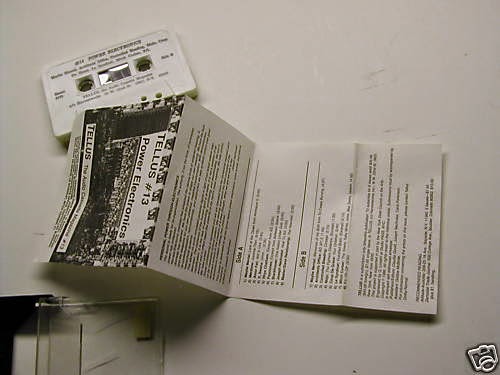 From the same magazine as “All Guitars” we have the Tellus #13 compilation,and the theme is “Power Electronics”. An Industrial sub-genre that, unfortunately, Americans were spectacularly shit at. Most of this tape can just about fit in the Old School Industrial bracket,which by 1986 was pretty old hat. Either that or its just plain old experimental soundscape’s. Cassette culture never really established itself in the USA until '86,and highlights the difficulties of that country to advance artistically due to the isolation of the various inspired communities across that great vast landscape landscape that sadly suggests Country music rather than Power Electronics. Even though the prototype of Punk first started gestating in downtown New York, it needed to be imported into Washington DC,and Los Angeles from the UK,and the rest of America from MTV. The same happened with Industrial Music,although that was almost completely 100% British; the second Industrial Revolution if you will? This of course causes a time delay of around 6 or 7 years,and explains why Americans still prefer just to 'Rock Out',as they like to scream from time to time.


Merzbow is about the only genuine Power Electronic track on here, and he's Japanese. Controlled Bleeding is sort of battery Powered electronics Lite, Rhys Chatham isn't even in the Industrial camp at all,and Joseph Nechvatal, is intellectualised Plunderphonia!....check his other tapes here!


You have the power to DOWNLOAD HERE!
Posted by Jonny Zchivago at 18:03

Thank you; what a nice memory. I found this in an art gallery/record/book shop when I was in high school, on a field trip to washington DC, when I wandered away from the big art museums. Some silly, some enjoyably foreboding. The Coup de Grace may be derivative, but still nice to hear.

what happened to dog as master? did hal mcgee complain? I knew hal mcgee in the 80s and while he was a really nice guy, I don't know if Ive ever known a more tightly wound human being in my life.

Well, i was gonna waffle on about the changing shape of pigeonholes and such...

Great tape (and always good to have a Merzbow track I don't have) but Power Electronics? nah

Anyway, shortly there will be the If, Bwana / Dog As Master‎ - Untranslatable tape released on Cause And Effect in 1986.

I find it funny how several of the artists here were perfectly capable of producing some hellacious noise, but most of the tracks here are surprisingly tame. I mean, the Controlled Bleeding track is fun and loud and reasonably fitting, but it's nowhere near as nasty or evil as the stuff from the Knees and Bones sessions not two years prior. Now, Merzbow's track is spot on, but 1985 was nowhere near his peak brainfuck year; Le Syndicat have Whitehouse's synth style down but are fairly restrained here; and Blackhouse (like CB) are nowhere near as brutal here as on their full-length efforts. It's really disappointing!

Funny thing. As you were capturing the tape's audio, you also captured your Mac's system sounds. Listen to track A3, after just 9 seconds in, you'll hear the sound of "Move to Trash", followed by "Done Ripping CD". I heard the trash sound a bunch of times in 2, and I thought, that sounds familiar - of course, it's Merzbow, so I thought it was part of the song (or "song") ! I have only listened to up to track 3, so I don't know how far it goes.

yeah sorry Kenny, I've done this on a few rips now. I have now learned to leave my computers alone when ripping. Sometimes it fits, other times its just horrible.But i can never face re-doing them again. I'll admit to editing the offending system noises out....see if you spot these edits as some kinda challenge whenever you're reeeeaaaaaalllyyy bored.

Jonny, you must not have been paying attention when I asked you to remove my Dog As Master stuff from your blog. That includes Google Plus files and Mediafire. Whether anyone's heard of me or whether you like my stuff or not or whether I actually want to actually sell them or not is beside the point. I am offering all of my recordings on Bandcamp. I want people to hear my music through me. Hope that makes sense. Show some common respect and decency.

Fair enough Hal. I forgot i put the links up in the comments section.Dunno about common decency,but respect is due.

THAT IS R-E-S-P-E-C-T JONNY! LIKE THE SONG SAYS FROM THAT COLORED GAL ON THE RADIO SINGS ABOUT! GET SOME YOU YOUNG PUNK! IN MY DAY IT WAS COMMON AS ORANGES AND WHITE SKIN! DO YOU KNOW WHO I EVEN AM JONNY!? I'M HAL MOTHERFUCKIN' MCGEE! I BUILT THE GODDAMN MICROMACHINE MUSEUM OF CASSETTE TAPES! I DESERVE RESPECT YOU INDECENT PIG! IF PEOPLE WANT MY SHIT AND WE BOTH KNOW THEY DO THEN THEY COME TO ME DAMMIT SON! THEY COME TO ME AND NO ONE ELSE PERIOD! DO YOU KNOW WHO I AM JONNY DO YOU REALLY!? I'M HAL MOTHERFUCKIN' MCGEE! I INVENTED NOISE YOU SON OF A BITCH! THERE WAS ONLY SILENCE AND THAT DAMN GUITAR STUFF THE MINORITIES LIKE BEFORE ME! I AM A LIVING LEGEND AND I DESERVE NO DEMAND RESPECT FROM YOU JONNY! DAMMIT DO I MAKE MYSELF CLEAR? DO I? IS IT CRYSTAL JONNY? IS IT CRYSTAL METH... er... I MEAN CRYSTAL CLEAR JONNY!? WELL IS IT JONNY!? CRYSTAL??? SAY IT WITH ME THEN! LOUDER! LOUDER JONNY! I CANT HEAR YOU! HAVE SOME DECENCY JONNY! IT'S QUITE COMMON HERE IN FLORIDA JONNY! BUT APPARENTLY NOT SO IN YOUR OWN CURRENT LOCALE OF INDECENT TRASH FOLK! IS IT JONNY!? ARE YOU HEARING ME JONNY!? ARE YOU GOING TO HAVE TO MAKE OLD HAL BUY A DAMN PLANE TICKET TO FROGLAND SO I MAY COME AND WHIP YOUR ASS UP AROUND THOSE BROKEN EARS JONNY!? I WILL TEACH YOU SOME RESPECT JONNY! IT IS A COMMON KNOWLEDGE LESSON JONNY! YOU KNOW WHY THEY CALL ME THE DOG AS MASTER DON'T YOU JONNY? WELL IT'S BECAUSE I WILL MAKE YOU MY PUPPY DOG BITCH AS I OWN YOU! I KNOW THAT DOESNT MAKE SENSE REALLY BUT THATS THE JOY OF NOISE MUSIC JONNY... AS IT DOESNT HAVE TO! THERE ARE NO FUCKING RULES JONNY! EXCEPT ONE... DONT TOUCH HAL'S SHIT JONNY! DONT EVER TOUCH MY SHIT AGAIN DAMMIT! I HAVE IT ALL METICULOUSLY ARRANGED IN A VAST AND COMPLEX SYSTEM THAT YOUR SIMPLE PUNY EUROPEAN MIND COULDNT BEGIN TO EVEN FATHOM! IM HAL FUCKIN' MCGEE JONNY! I WONT GO INTO DETAIL ABOUT MY FILING SYSTEM BUT JUST KNOW THIS... IT IS MY OWN SYSTEM OF MY OWN MAKING AND IT IS NOT TO BE TOUCHED AS IT IS MINE UNDERSTOOD? IT IS ALSO TRADEMARKED JUST TO BE SURE SO NO HANDS BUT MY OWN WILL EVER TOUCH THEM! GOT THAT JONNY? I KNOW WHERE EVERYTHING IS AT AND IF YOU EVER POST EVEN A MILLISECOND OF ONE OF MY GLITCHES I WILL KNOW IMMEDIATELY AND THEN I WILL BE FAST UP YOUR ASS SO HARD WITH IT THAT YOU WILL NEED TO EAT NOTHING BUT PRUNES FOR A WHOLE FUCKING YEAR JUST TO DISLODGE ME AND MY ANGER!!! DO I MAKE MYSELF CLEAR JONNY? YOU DISRESPECTFUL BLOG BOY CUNT JONNY! I GOT TO GO NOW JONNY BEFORE THOSE DAMN CUBANOES START STEALING MY ORANGES AGAIN IN THE SIDE YARD BUT I WILL BE WATCHING YOU JONNY! LIKE A STERN HAWK NOSED RED INDIAN SCOUT WATCHES THE BUFFALO IN THE SPRING JONNY! GOT IT!? DOESN'T MATTER IF IT MAKES SENSE I MADE IT UP AND SO IT BELONGS TO ME! ALL OF IT! I AM THE MASTER JONNY! YOU WILL RESPECT MY NOISE JONNY! DO I NEED TO CALL YOUR FATHER JONNY? COMMON RESPECT JONNY! OKAY THEN. THANKS. I LIKE YOUR BLOG TOO BTW JONNY. KEEP UP THE GOOD WORK SO LONG AS IT IS NOT MINE JONNY. HAVE A GOOD ONE THEN JONNY.

(THE DOOR SLAMS... the sound of a golf cart engine turning over is heard outside followed by wheels grinding on gravel as Hal put put's away. our hero and legend rolls off back towards the Leisure World gates and as he goes he can be heard indiscriminately yelling discriminate remarks and/or accusations at migrant workers toiling away in the adjacent orange fields along the paved road from which behind an orange sun sets. THE END ☻)

*this has been an interpretation in a recreation based on actual events and as seen through the eyes of an everyday common blogger whom may have by chance came upon this. either now or at a future date unknown. in no way is it meant to mean that you can share Hal' shit still. viewer discretion is advised to never ever ever share Hal McGee's noise tapes with anyone ever nor even look at his art too long without his being made aware and giving consent first and then only may you look while he watches you from an undisclosed hiding place of his own choosing. with or without pants also. this is his sole discretion and will not be announced nor discussed before nor after unless Hal chooses to do so. which is rare. if you fail to adhere to these stipulations you could easily be the person chided herein post in place of poor Jonny... YOU HAVE BEEN WARNED!

i like Hal McGee Jonny. he has spunk you know. ☻