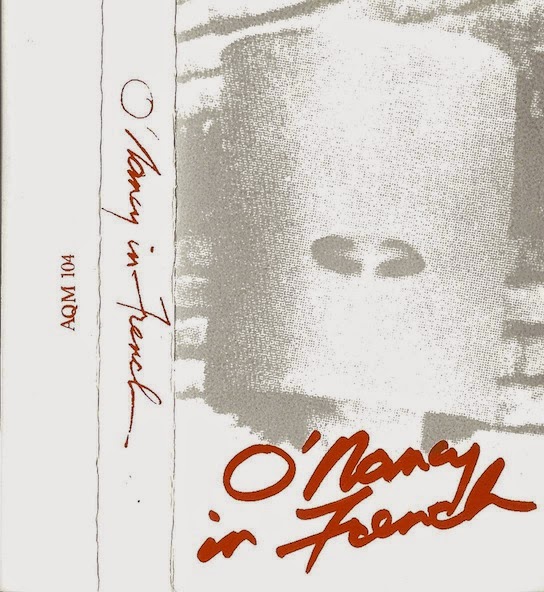 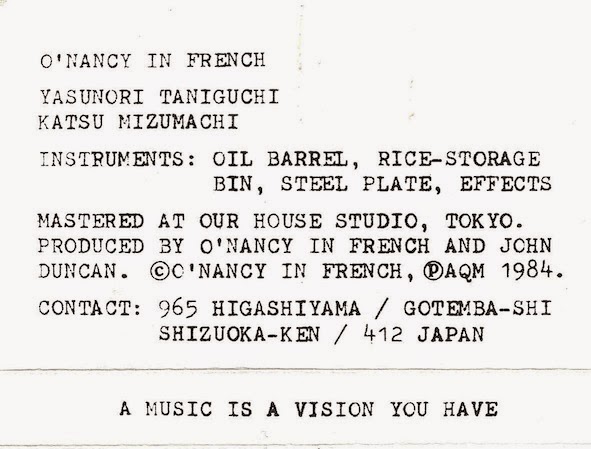 Like my mother used to pick which Race Horse to bet on by virtue of its name, and what possible family connection it could have.I was drawn to this cassette because my Daughter is called Nancy, and she is a French Speaking Brit in France (Check her blog and do me a favour and leave some encouraging comment,without mentioning me please?). So , as my mother always won on the horses, it was no surprise when this tape turned out to be fantastic!
O' the beautiful noise that is scraping steel, feedbacking rice storage containers,and Oil Drums! As if played by a sabre toothed violin bow,these everyday objects emit a wild variety of sustainable grating tones only previously available from a Cello with razor wire for strings. Imagine the rim of a giant wine glass rubbed by a giant calloused finger,then feed the resulting racket through a distortion unit; what a party trick that could have been.
The bizarrely named, O'Nancy in French, are in fact Japanese duo Yasunori Taniguchi, and Katzu Mizumachi, under the LAFMS auspices of John Duncan in the producers chair. They appeared a few times on other John Duncan related releases,but never again as O'Nancy in French!? Leave 'em wanting more I suppose, as the old showbiz saying goes?


DOWNLOAD thankfully not in fucking french HERE!
Posted by Jonny Zchivago at 21:39

I don't have enough of an accredited internet identity to be permitted to comment on Nancy's nice blog but if I did this is what I was going to write about the comic strip #1: I'd say "Hey I think your comic strip number one is very cool.. The graphic style is v. energetic and manic and the narrative has a lot of energy and it's a little bit nuts, which is a very good thing. My favourite bit is the mention of frozen yoghurt as it's both very random and very tasty. I really like the skyscrapers too. For another comic strip how about a story about a bicycle journey which ends in confusion? Or maybe just with a comical pile-up? Slapstick is always good fun, but it might be tricky to draw. Maybe Ed the cat could show Al the dog a thing or two. Get his own back. Cats are really much cleverer than dogs of course!"

Nice one Bill. I'll snidely pass this comment on to her blog somehow. much appreciated.
JZ

You're very welcome. The blog is really nice and she looks to have a lot of talent as an illustrator. DIY comic strips are the biz.