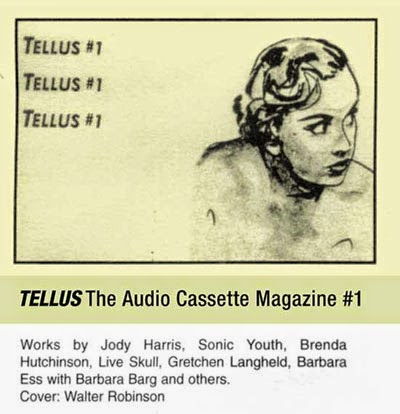 Yeah Yeah Yeah, we know Rhys Chatham beat Glenn Branca to the punch with the detuned guitar minimal rock fusion thing.And i'll admit “Guitar Trio (1977) is a great piece of work.....dare I say,whilst using music journo cliché speak.....”Seminal”!? Alas, Chatham ventured off into less successful minimalist areas, leaving Branca to take it further. What we have here, on volume one of New York-ish audio magazine, Tellus; is our minimalist hero's banging out a live version of this classic tune in 1979! This one chord one note classic,is churned out in a slowed down version of indeterminable length,as its faded out while still in progress.
But, there's more on this great compilation,featuring plenty from the burgeoning East coast experimental music scene of 1983. There's some live Sonic Youth, some conventional alt-rock from Live Skull,and a great tune from former Static member Barbara Ess. Also we have sound collage legends like, Tellus magazine co-founder, Joseph Nechvatal and his Minoy like “Ego Masher”.All mixed in with a tinge of the prevalent Mutant Disco that was around downtown New York at the time. I may be wrong but this organisation is still going today!?

DOWNLOAD and tell us one HERE!
Posted by Jonny Zchivago at 23:36