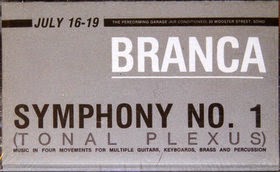 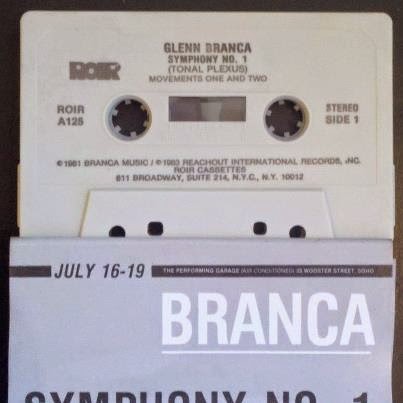 If Beethoven,Bach, and Bartok were around in the late twentieth century, they would have used the fashionable instruments of the day,and reflected the world around them in sound? I would have loved to see what Bach could have come up with when confronted with a Modular Moog system for example. Also of course they would have had to live their lives as a 20th century person,to absorb all the influences ,sophistications and neuroses of late modern man.


It would,of course , now read as Beethoven, Bach,Bartok and Branca. A kind of Crosby,Stills, Nash and Young of the neo-classical,except without the cocaine fuelled blandness of those Laurel Canyon numpties.


Branca,is a true modern classicist,using the symbolic instrumentation of his age, electricity,guitars and the drum kit, to recreate the dissonant noise of the city. The constant drone of the traffic,the rhythmic noise of the production line, and the Doppler effect of passing sirens. There are sequences that recreate the paranoia and fear of the Cold War era in which this was written, as massed electric guitars sound like a thousand approaching planes and missiles raining warheads on a doomed civilisation; if civilisation applies to what humanity has created for itself?


Symphony Number One,is the best Branca symphony in my humble opinion,featuring all his old chums, Lee Renaldo,Thurston Moore,Barbara Ess,and Wharton Teirs. It retains the excitement of his early work, holding onto the urgency of its rock roots,without becoming indulgent,as happens in later works. Also,its Lo-Fi recording quality adds to the authenticity of genuine classical music that has its roots on the streets rather than some stuffy conservatoire in Salzburg.

Thanks so much for the Branca!! Really loving it, and the commentary is a hilarious treasure, having shared some of those very thoughts. Thanks a million bud!

some thirthy years ago I bought this tape via mail order...;
then I bought the reissue on LP. Now, for a number of reasons, I listening to the music mailny from PC; therefore I am gratefull to you for the music you offer! (not only Branca, but also This Heat and much more...)
By the way, I liked a lot your comment: "Why do these groups do this?..........oh sorry, I forgot......cash".It is true, not only for TG.
Kind regards from Greece