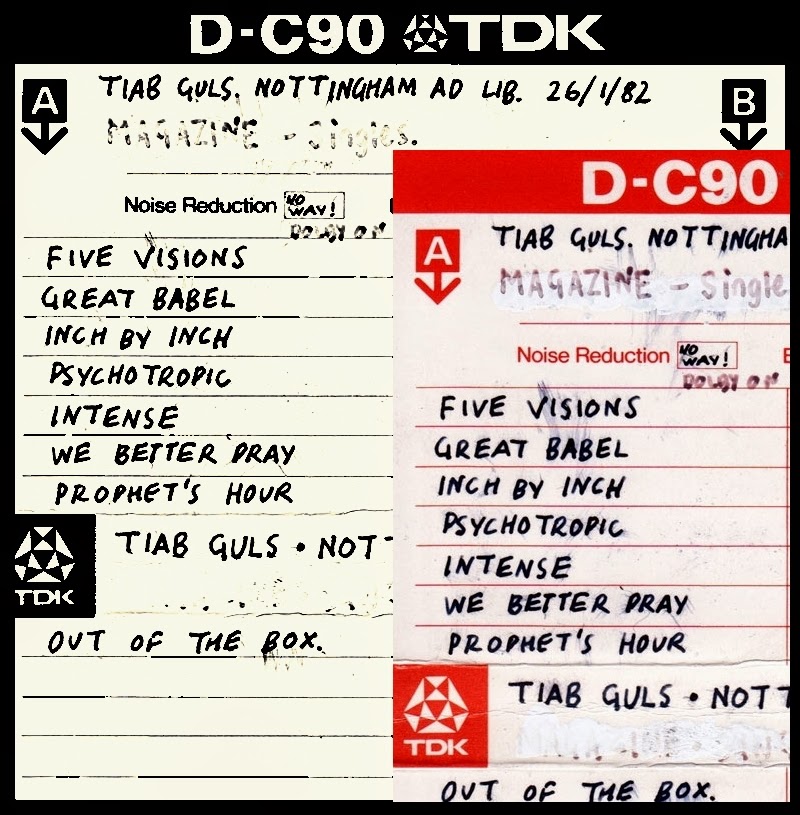 Well we've had This Heat live at Whispers in Nottingham 1982, now we got Metamorphosis at the Ad-Lib Club, Nottingham from the same year! They got all the top line acts there! I think they even had two top flight Football teams as well in 1982!? These days will never return, but Metamorphosis has, in the form of the complete tape of the concert appearance at the Ad-Lib, from which was culled three tracks for the “Conception 1982” tape.
Called Tiab Guls on the night(?),making its debut on the web, and ripped in top quality 320kps for y'all. Its more 23 Skidoo-isms, 400 Blows jobs, and that Certain Ratio of wavering funky drummer beats to cheesy industrial clichés that give this group a certain infectious charm that’s irresistible.

DOWNLOAD an adlibbing metamorphosis HERE!
Posted by Jonny Zchivago at 08:45

My mate's just linked me to this. Amazing! I didn't even know a recording existed. Where on earth did you get it?!

But anyway, no, we were called Tiab Guls for quite a while. I can't remember when (or why) we changed it to Metamorphosis. Some time later that year anyway.

Hi Jonathan, you'd be amazed what crops up on the internet from time to time. I can't remember who gave this to me,I think it was someone called Mike...a bit vague i know.He saw my Elephant table post and sent me an mp3 file.Its very good quality i may add. Do you have anymore memories about the Nottingham gig? Its quite a long set for a support slot. And where did you play in Leicester, as featured on the Conception 82 cassette?
I think i saw an interview with you on the web, and you had great difficulty remembering anything,so i'll understand if you can't answer.
Good to hear from you,
cheers,
JZ

Hi Jonny. Mike wouldn't be Mike Noon, would it?

Nottingham: Whether it was a support set or not wouldn't affect the length, because we'd have been putting the gig on ourselves anyway. It might have been one supporting Section 25. I'll be able to tell when I get round to listening to it because the drum sound will be much richer (using Vin's kit). Not the drumming itself, mind. Fair criticism on that ;) . No, it wasn't... let's say... very secure, though of course I thought I was the bollocks at the time. Actually we might still have had two drummers for this gig, but the mistakes are probably just me.

Leicester: That was one of a few gigs supporting 23 Skidoo. The others: Derby, Retford, maybe Nottingham as well. Leicester was probably at the University. Two things I do remember about that: 1) The interesting noises (I think it was this gig) were Fritz (from Skidoo) messing about with a harmonizer on the mixing desk . 2) Some guy came up to us afterwards to say how much he enjoyed the set and I was offhand with him. Strange how you remember embarrassing shit like that. He probably thought (correctly) that I was a total wanker. But then we were only 18 or 19.

Your entire last post makes me laugh btw. Yes, we were certainly influenced by Skidoo – and A Certain Ratio. And of course the name Tiab Guls comes from Gristle. But the tag "Industrial" is mostly retrospective, isn't it. Back then it was just a lot of people who sort of knew each other.

Ahh, the harmoniser, thats when you lot started to sound like A Certain Ratio,sextet era.So it was 23 skidoo's fault! Sorry about the drumming critique, it reminds me of my drumming,always striving to be Billy Cobham, never learning to play within the limits of my ability!
Dunno, I think we thought of 23 Skidoo as industrial,but A Certain Ratio as post punk. It had something to do with the ideological content, weather you were dumped in the Industrial box or not. I reckon you just made it in,albeit retrospectively in this case.

Some chap at a Fall gig came running over to me ,all excited, and asked me when my next album was out! I answered .."er...;sometime after christmas",and rejoined the crowd. I tried not to be a wanker,but its so difficult; especially when you had no idea who he thought you were? Whoever it was, I wasn't!
Glad you were amused by my narrative.Not many of the bands featured in these pages are offended, except the prat from Crawling Chaos. You can read what he thinks of me here:
http://crawlingchaos.co.uk/879/goat-die-or-diy/

Can't find out what 'Mikes sir name is,but Noon is possible. I'm sure he'll see this and identify himself.

Very interesting post! I'm from Nottingham & have never heard of Metamorphosis, though they're slightly (possibly) before my time. Looking forward to giving this a close listen...

Bejesus,you should get on countdown! I stupidly never noticed this hidden message. Just like I never noticed the phrase "Turn me on Dead Man" masked in the Beatles revolution no 9.....mainly because it isn't there!...but slug bait certainly is.
Before your time?...how old were you in 82?

I would've been 15/16, so I'd have been hanging 'round in local pubs at this point rather than frequenting Hockley's cool venues. A (slightly older) friend of mine saw Crispy Ambulance at The Ad LIb 'round this time too, the lucky bastard. :)

Crispy Ambulance was one of our gigs as well (apparently their last back then before they broke up); and Google says we supported them, though I really don't remember that.

Apologies if you've seen this already, I figured it may be of interest (re: the Crispy Ambulance show, etc):

Bits of the Ad Lib show reminds me of Sextet-era ACR due to the female vocals, etc - pretty impressive frankly! :)

Very interesting.I even remember clearly the Dave Henderson supplement from Sounds as if it were yesterday. Unfortunately is wasn't yesterday!
Yeah, its the Harmoniser twiddling that creates the ACR effect.
'You're going home in a Crispy Ambulance"!

Well, I've finally gotten round to listening. Hmmmmmmmm. Were we really as bad as this?! Some of it – *most* of it – is just facepalm business. Okay, it does get a bit better as it goes on, but that's not saying very much.

Drummers: there were definitely still two of us here (not exactly well coordinated) and it *is* Vin's kit by the sound of it.

There's no harmoniser on this btw - that was only at the Leicester gig, I think - but there seems to be echo and perhaps a flanger on the mixing desk. That would've been Jon Hurst, I guess.

Thanks for posting anyway - it's quite interesting to me as personal history - but I don't think I'll ever listen to it again ;)

Hello again Jonathan,
Never say never,as 'they' say.Maybe there are exceptions to this unwritten rule that i've just written,so maybe it has now earned the status of written rule as of now?
Yep, i suppose it is pretty bad....but thats part of its charm is it not? But from a subjective point of view ,I can understand your cringe moments. Its all good fun innit?