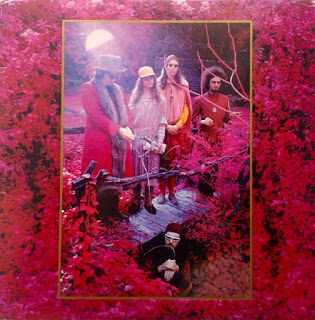 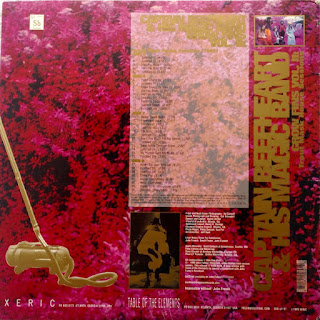 Well, we've been through the 'Cults that made Music' section,and its various offshoot,so its logical to have a go with 'Groups who behaved like cults', one of which was probably the greatest abstract blues band that ever existed,although I can't name you another one....Captain Beefheart and his/the Magic Band.
It's also not only the fiftieth anniversary of the Moon landings,Woodstock, and the Manson murders, more importantly its a half a century since the greatest hour and twenty minutes in musical history were captured on tape.The fiftieth annivesary of when the Moon landed on the Earth,and when Beefheart turned down a slot at Woodstock.
One mentions Charles Manson,well Van Vliet had a lot in common with Manson's methods.The cult members were plyed with lashings of LSD,even though Van Vliet insisted that the band were completely drug free, and they had to sit and listen to his poetry read out loud daily by Antennae Jimmy Semens/Jeff Cotton.
In the only existing interview with Antennae Jimmy Semens,he even mentions this(he said he enjoyed it!?) and that the Captain knew Charlie M. Which was obviously possible. Jimmy also reckons that Don was far more powerful than Manson;but thankfully we didn't see the charming Antennae Jimmy,or Zoot Horn,or even The Mascara Snake stabbing any Hollywood starlets.Jimmy's only atrocities, if we could call them that,amazingly they are still people who regard the whole of 'Trout Mask' an atrocity(!?),were the genius guitar work and magnificent vocals on 'Pena' and 'The Blimp'.
An ephiphanal moment for me came as a Punk infected teenager, when I heard the first few notes of "Frownland" for the first time,and knew imeadiately, that the next 79 minutes were going to be special. I instantly 'got it', unlike the many other TMR fans who said it took three or more listens????..Nah!....this was the music I had been waiting for, like hearing the Pistols for the first time,but this was the next step up, like PiL was giant leap from The Pistols.
This album collects the attempted 'Field Recording' versions of the songs that Zappa wanted to capture,as if it was a nature programe capturing an abstract blues concept band in their natural habitat.
So 'Grow Fins' was a special opportunity to hear the songs without the vocals obscuring the shear genius of the massively complex arrangements, and there are none more complex, or as short, as that achieved for "Frownland" (just check out this in depth analysis of Frownland by a very serious composer...click HERE!)It's only one minute forty seconds long, but,it achieves the effect of an hour long symphony,with all the unecessary bits bypassed.Leaving the most perfect contraction of musical innovation that took lesser lights, like Wagner, 6 or 7 hours to achieve, then still fail.
It seems, that to create 'Great Art' you generally need a single vision, which a rock band very rarely has.Normally the Drummer wants to include one of his songs, the Bass player wants his bass louder,and the keyboardist wants to know why the notes are discordant,and why it sounds 'terrible' before handing out a score for the string arrangement he worked out last night.
Baring that in mind, it begins to make sense as to why Beefheart used these brain-washing tactics to get his vision into reality.
Of course most of the band members (Not Jimmy Semens I have to add,even though he frequently got beaten up!?) have spent the ensuing years moaning about not getting the credit they deserved, the bits they wrote,and what a asshole Van Vliet was.
The work stands up for itself in the perfection of its imperfection.

DOWNLOAD the trout as captured in the wild HERE!
Posted by Jonny Zchivago at 09:56

I can’t imagine this music ever being realized unless the musicians involved were brainwashed, coerced and forced to play it. They always bring their own egos and agendas to the mix. In recent years John French (Drumbo) has maintained it was really all about him “I did the arrangements”, etc. I’ve never heard any of his work the comes anywhere close to this. Beefheart later admitted to being a tyrant about how he wanted his music. I rekkin’ he had to. Good on ya Don.

When 'Trout Mask Replica' was first released only one record shop brought it in, 2 copies. I was lucky enough to grab the second copy the day after it arrived. I was told the first copy was bought by hometown boy Burton Cummings of 'The Guess Who'. I've always wondered what he thought of it. Many thanks for this one!

When I first bought it, in maybe early '70, I listened to it over and over, and to nothing else for a while. Because it sounded like nothing else. It didn't sound like noise to me. It sounded like real musicians playing real music. It was obviously very worked out, very rehearsed, very together, on a level nobody else could even see, leave alone work at. Nobody on acid or dope or any drug could attain that kind of discipline - I think it was Zoot Horn Rollo who said they were "zen art dudes", and that's about as close as any description's going to get.

As to who gets the credit - they all do. And so does the time and the place. All of this could only come out because of everything that went in.

Out of all the group members there's only one who would have come up with Trout Mask without the others, and that is Don.The Magic Band would just have had different pawns to make it. The other band members have proved they don't have an abstract bone in their bodies.Even French admits that it was 100% Don's vision.Saying they all get the credit is like crediting Michaelanglo's assitants for creating 'David',or the actors for making 'Vertigo' instead of Hitchcock.

My next favorite Magic Band period was the last one, ’78-’82. They has the benefit understanding what they were shooting for since they had clear templates to work from ala Trout Mask and Decals. Don’s lyrics/poetry grew to carry even more weight, for me at least anyway. “Sit spread-eagle on poor men, piled high on Truth Mountain, last peak in clarity’s chain…” I’m not much of a prose wonk, but DAMN that’s a powerful line. There are a few more, but you get they idea. I imagine anyone reading this is familiar, but just in case, listen Here and Here. Dang, thr link don't look like they made it through to the comment window, pookie poo-dang. https://www.youtube.com/watch?v=V5dBr8kLxfY https://www.youtube.com/watch?v=kPLjKHKoE8w

This may be controversial, but I kinda like 'Unconditionally Guaranteed' and 'Bluejeans and MoonBeams', mainly because it comes from a time when i found the production values comforting, like 'Pilot' and 'Wings'...all artistically awful, but those acoustically dead instruments, no reverb on the vocals, and the slow to mid range tempo's just make me feel like a kid again.
I could listen to 'Observatory Crest'all day, the same as I could listen to 'Frownland'.....replacing the moaning Magic Band with a bunch of session men was a last act of a decaying genius.For me the worst Beefheart album is either 'Shiny Beast' or 'Ice Cream For crow',both excellent, but pretencious as fuck...Don had totally lost it by then,and is carried by the magic band. 'Doc at the Radar Station' managed to avoid the pretentious tag howvever.

I have to admit I do have a weakness for pomposity in music, the more pretentious the better. That said, I can appreciate that a lot people think it smells bad. It’s an argument people make about a lot of music I like, Trout Mask included. I still really like Peter Hammill. The wife feels the need to leave the room. ‘What? Can’t you understand that through his histrionic delivery he lays bare the dystopia of modern society and it’s effect on….. okay, okay, point taken’ That’s why it seems like a good idea to be wary of cults, conspiracy theories and the like. I’m as prone to be caught up and potentially misled and anyone. The thing about Don, after Trout Mask I was interested in anything he cared to record. Electric blues doesn’t do much for me at all, but Beefheart brings an approach that makes it worth my time. I actually like parts of UG and MoonBeams more than moments on Clear Spot, tho’ I’m not going to walk out on any of ‘em.

Indeed Hammill, another English public school boy, has a tendancy to make all his songs with or without VDGG, sound like some kind of bad musical...but I didn't realise it until someone pointed it out to me!...now i think that everytime i hear his work.They've put it in my Brain!
His solo work can be heavy going at times, but all the VDGG albums are great, even if they do sound like a Stephen Sondheim musical from Hell.

reb B, you do John French a disservice - he does not claim it is "all about him" - he merely. states what happened. Beefheart was useless as a musical notation writer, and he had to communicate what he wanted to French in a vague way, that French tightened up. There's nothing wrong with claiming most of the arranging was done by himself.

I suppose I can't blame him for making a career out of it.I'd have taken the full credit if it was me.