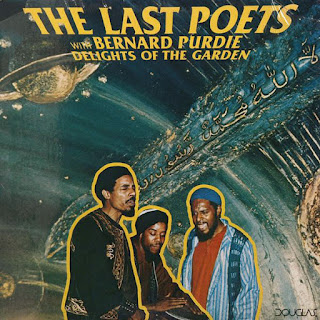 Sorry for inflicting more Last Poets on y'all, but this one isn't so awful,and I've got fuck all else to do because France is on Covid#19 lockdown.
There's no mentions of the 'N' word,and improved mainly because its got drum legend Benard Purdie on skins. This applies some much needed discipline on these proto-rappers,and gives it some of the Funk that was missing from their early albums.
Personally I find Purdies drum style rather boring and unadventurous, but it fits in nicely here.
Yeah, there's the usual bigging up of the need for armed revolution,and moaning about how their distant ancestors were made slaves by white mens distant ancestors.I've researched my own family tree and there were no slave owners,in fact most of my family were slaves of the British system,paid fuck all,and forced to fight and die in wars that had nothing to do with them,or any choice in the matter.
I'm personally thinking of suing the decendants of the Roman empire for the crimes they commited in England during their occupation......and I want compensation(Financial naturally). Also i'm waiting for an apology from the British Government for World War One......there's as much chance of this happening as there is for compensation (financial,again, of course) being paid to the decendants of the victims of the slave trade.
Everyone's been fucked over by someone,be it individuals or state institutions, in the long saga of human history.Basically.....get over it FFS!?
A Fictional member of the public : "Jonny Zchivago you're a Racist and a Nazi apologist"......oh Fuck jolly well Off and ask yerself some very difficult questions dear Fictional member of the public!
One doesn't go to an Alcoholics Anonymous meeting and slag off your fellow members for being alcoholics,your there to cure oneself;so you introduce yourself thus:
"Hi, I'm a fictional member of the public and i'm an Alcoholic"....then take it from there.So before you call me a Racist be really certain that you ain't one yerself? The time honoured excuse of "But I've got lots of Black Friends" isn't acceptable.Just as the prefix of "I'm not Racist, but....!" is almost an admission.

(PS I'm also a Homophobic Fuck too apparently...check it out here:)

DOWNLOAD the funky poets HERE!
Posted by Jonny Zchivago at 19:20

I agree on Purdie, in general. Dull. Will listen to this though.
I think nerd bad drummers are fascinated by him, because they can eventually, by rote, duplicate a few of his beats, at least one of which has a name, the Purdie shuffle. Dull.

I'm actually more fascinated with watching those nerd bad drummers play along to songs on youtube--like all those guys who play along to side one of "Thick as a Brick." Awesome. Especially when they have a double kick and like 15 different toms.