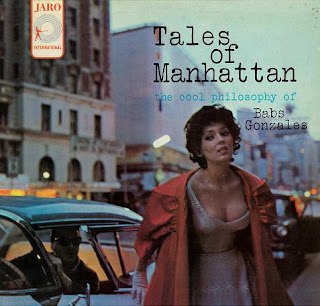 One suspects that this Cat ain't joking? It sounds like a parody,but just maybe Babs means it?
There's a part of me that hopes he's serious,so for the sake of this narrative I'm treating this as the real deal pops.This is a less eloquent,and cliched black bloke, version of Jack Kerouac on happy pills,with a cooool Be-Bop backing band.
Jazz writer Jack Cooke explained that Gonzales "assumed the role of spokesman for the whole hipster world... [becoming] something more than just a good and original jazz entertainer: but the incarnation of a whole social group."

Sheeeet...this cat was serious!?
He really did see himself as thee cool Philosopher of 'Hip'.Maaaan that's the Mostest!
Sheer Joy.
There is,however one negative amongst all this pleasure:
Mother Earth was pregant for the ninth time....could this be the moment she was impregnated with the Hip-Hop virus?

A1 The Hat Box Chicks
A2 Broadway - 4 A.M.
A3 You Need Connections
A4 'Dem Resolution Liars
A5 Manhattan Fable
B1 'Dem Jive New Yorkers
B2 The Squares
B3 A Dollar Is Your Only Friend
B4 The Cool Cat's Philosophy
B5 Ole Braggin' Freddie

Unfortunately the chick on the cover ain't Babs which might of fooled a few swingers from the burbs, generating a sale or two.

Agreed,she's HOT daddio. But less hot if she had a dark brown voice like Babs, not barbara,gonzales.

Most expubident! Nice to see someone acknowledging the wild, swingin' and way out, Babs Gonzales! A true original.