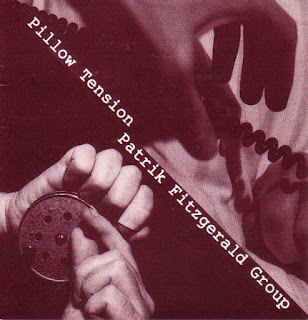 Greece never forgot all the heroes of the post-punk era, unlike in the United Kingdom,where all that brilliance was dumped in the trash for the sake of dancing themselves silly and taking enough erroneous drugs to create a soon arriving Tsunami of dementia for the so-called 'Trainspotting Generation'.
So naturally this was the only country (apart from Norway) that would touch Patrik Fitzgerald with that proverbial barge pole. The result was this mid-nineties Greece only CD recording of Patrik and Group, giving a slick portrayal of songs old and new,all making their only appearance on any recorded media format.
Again Patrik sounds like he's still only twenty,and the songwriting is as good as always,and as bleak as always. "Frozen Dreams" is one of my favourite PF tracks of all-time.....maybe its because i can identify with the turmoil of becoming a parent.Most songs describe this life changing/ending experience as something truly wonderful,but the reality is that this opinion rarely surfaces post-natal,among its victims. Also deemed 'Beautiful' is the actual birth process,which was like a scene from Hellraiser.As soon as i saw the blood soaked stainless steel chain of the ventouse pulling my trapped daughter into the world, I was immediatley struck with the reality that there really was no God!All hope died in that moment.
Its like giving birth to a prison,and all the depressing prospects that come with a long tranch of penal servitude.....all because of a long period of penile servitude. My advice to all you fertile types who probably aren't reading this blog about vintage musics, is.....keep the fucking thing in your pants...its for pissing.
Twenty years later, i have emerged from the darkness to feel grateful that I have a Daughter,and nothing really matters. Except, that to bring an innocent lifeform into the bleak doom of existance is a selfish crime of enormous proportions......again keep it in yer pants ladz.
Now i'm too fucking old to do everything we talked about in our youth,(I say 'we',but of course we split up), and don't expect your kids to hang around to ease your lonliness either......those ungrateful fuckers will be off on the adventures you never had, except for the annual visits they will grant you for the final twenty years of your wasted life.So in fact one will see your loved progeny only another twenty times before you die.....unless the virus gets you first,and then they get your house that you broke your back to aquire,for nothing?!
If i'd have heard this album before my biological clock,or cock, told me to procreate..... a special kind of madness!?.....i might have heeded the warning;but i had no idea that patrik had made any albums at all after 1979.......now i do,and so do you, so no excuses. Either abstain or put a 'Rubber Johnny'* on your knob#.

DOWNLOAD to relieve the tension HERE!
Posted by Jonny Zchivago at 01:06

Thank you for all the wonderful Patrik Fitzgerald,

Who knew there was so much?

Oh my god. While your writing displays a very good sense of humour it seems to come from a place that isn't funny *at all*. Gallows humour, I guess.

About that Patrik record: I was quite disappointed back in the day as it all sounded too "normal" for my taste. He is not the band guy, I guess, the result is similar as "Grubby Stories" imho. I only like one or two couples of songs from it but will now give it another try.

I was very thankful for Lazy Dog Records back then because they made a fantastic double compilation of everything Mecano had ever released. Even in the 80's and not too far away from the Netherlands I had never managed to get my hands on all their 12"es.

Hi Wolfie...can I call you Wolfie?....i know my sense of humour isn't to everyone's taste, and yes, ultimately it does come from a dark place,but i find it cleansing totouch on some uncomfortable truths, like being racist,and,in this case, admiting that parenthood is not the sunny sky that its projected as being. As much as I have that famed unconditional love for my daughter,and wouldn't change anything because its happened, I would not recommend that anyone...with a life....does it. Besides the environmental damage having children does.

I also didn't like this record when i first heard it....but as always i played it several times, and the slick production faded away by the fourth time.Concentrate on the poetry and the harsh truths that Patrik lays upon us.

All my life I have fighted against people calling me that, but you as the only person on earth are officially allowed to do it. Now isn't that flattering?

I don't have children. Always argumented that the world had become too bad a place to bring a child into the world. But who knows what is right? Maybe my child would have became the musician or politician to save us all :)

So far I kept two additional songs including "Frozen Dreams". But why did Patrik allow to record that stupid saxophone? Nothing against saxophone, but that player was no Stephen Brown or Lora Logic. Will try to concentrate on the lyrics, though. But the production makes it much harder for me to understand them.

Indeed, Rock Saxophone should be illegal. It worked with The Cravats, X-Ray Spex, and the juries out on Theatre of Hate, punk and saxophone are a No No in my book.Don't even like keyboard players in Rock, and don't get me started on Backing Singers and Brass Sections!!!!!??? But generally, you can't get more minimal than PF.

PS thanks for letting me call you Wolfie.....was a big fan of a sitcom called 'Citizen Smith' in the late 70's,which sort of followed several characters in the too old for punk generation...the lead character, a pub freedom fighter, was called 'Wolfie' Smith. I envy you this nickname.

We forgot to mention one great band with a lot of saxes: Morphine who used them musically like guitars! I can hardly think of a cooler sound.

Never heard of "Citizen Smith" before. Had a look on Youtube, seems to be quite funny.