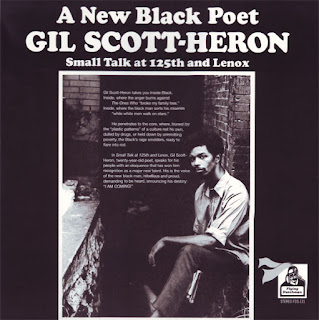 As Proto-Rap goes, only this album, a bunch of potty mouthed Black Comedians (Comedians of Colour,mainly Blue) and The Last Poets are understood to have provided the final template for what has come to torture us endlessly today.The late fifties jazz hipster jive talk provided the delivery of the words, and the black poets of the late sixties provided the politics. I doubt that Gil Scott-Heron would approve of the majority of the lyrical content of 21st century Rap,but then again, I don't think he approved of very much at all. He's got one of those lop-sided I ain't gonna agree with anything,smart arse crooked grimaces on his boatrace. After about four tracks you just want him to Shut The Fuck UP! Its tiresomely relentless in its bitterness,with no let up that you start hankering after a bit of Kanye West to give your brain a rest.
Those beatnik bongo's ,although admirably minimal, rarely change with the poetry,which is another aspect adopted by future Hip-Hop acts. Normally i'm a fan of monotony,but even Can packed that lark in after several albums,Neu! took a bit longer, and Hip Hop is still firmly ...there!
It's most bizarre how the mostest un-black music in the world, from Germany of all places, would find itself absorbed into thee most Black music in the world,this especially applies to  Kraftwerk who were the final ingredient for the Electro-Rap that would become called Hip-Hop. And don't under estimate the influence of the great Gary Numan either,who had never heard of Kraftwerk until someone pointed it out as a possible influence after he had a hit record. There's always a proportion of parallel evolution ,and mutual inspiration in the progression of the musical form,and Rap music is clearly the most glaringly obvious.......but,shut up moaning Gil, The Revolution will not be televised,nor will it be online, mainly because the Revolution will never happen!...but if it did, it most certainly would be televised on the miriad of social media platforms.......well I'd watch it,should be entertaining. I remember some live Rioting in L.A. in the nineties I think, when a mob of angry black brothers ,sorry I mean Persons of Colour,dragged a white truck driver from his cab and beat the living shite out of him on live TV. Like a 20th century version of Roman Gladiatorial battles.It had me searching for the thumbs down button on my remote control.This is Entertainment?
After all Whitey's on the moon isn't he?.....no wait, its says on Facebook that Whitey never got to the Moon?......thats the second best rant on this album nullified!?
He's angry about prejudice is our Gil,or bert, but apparently this doesn't apply to Faggots according to track Seven.Slightly hypocritical there Gilbert? Unless he was playing Devils Advocate, but somehow I doubt it.Not as 'Right On' as he sounds is he,or rather was he? Maybe I just don't like listening to anyone who is more bitter than I am!?

DOWNLOAD the not so right-on Gilbert Scott HERE!
Posted by Jonny Zchivago at 09:05

I liked how Whitey's On The Moon was used in First Man, but it was a bit confusing as to whether the protester on the mic was meant to be portraying GSH (didn't look anything like him), or if they'd just fictionalized the character.

In any case, don't think I've ever heard this full album, so ta. My absolute favourite is still Winter In America.

At least Kanye tried to get off the democrat plantation, doubt whether Gil did, whinging about the white man who of course were the ones who bought the records.

The Democrat platform?....can't tell the difference myself.
True that many a whiter than white person would proudly display their Gil Scott Heron collection to show that they ain't no racist...including me i suppose, but mine were carefully filed away on my record rack in alphabetical order of course. Except I admit i habour racist anomolies in my genetic memory.It's a darwinian throw back from the days of the missing link.Now,we should be able to rationalise these inate responses for just what they are....echoes of the prehistoric human animal,when tribal ruthlessness was a matter of survival.Another darwinian activity is also helping others for personal advantage and making non-agressive contact with a rival tribe.This latter trait is what we whiteys should be doing with our black relatives. You Dig?

i don't know if you're being racist or satirical honestly

Apart from pointing out the hypocritical prejudice of Gilbert himself, i'm being Satirically Racist and honest about my own Racism...which we all are by the way....at least you didn't come out and accuse me of being an out and out Racist, that would condemn you as a classic Racist in denial. Thee I'm not racist but...you are, crowd.One must Admit you're part of the problem to be part of the cure.