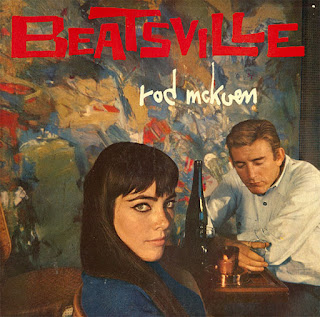 In 1959,like in 1968 for 'Psych' bands and 1978 for 'Punk', the record companies fell over each other,desperately scrambling to get a 'Beat' act on the roster.All the Kool Katz had been snapped up the year before.Miles,Bird,Kerouac,Chet,Mingus,Kookie,Fabian, and a tsunami of synthetic Beatniks bedecked in sweaters with holes in,worn out jeans with paint blotches on,sandals,uncombed hair,talking Jive and carrying a well thumbed copy of Lolita.
"Like...er...hey baby, i don't dig the man comin' on all the time.... get me?", said the Beatnik fresh out of drama school...looking suspiciously like Rod McKuen.A Beatnik by numbers.
He'd obviously just read "On The Road" after his manger bought him a copy with the words..."Read This,then come to my office in the morning kid."
New independant label, Hi-Fi records, supremo, Richard Vaughan was there with a contract and a pen,and "Beatsville" was born.
The suggestions of casual sex, misogyny,drug abuse,violence, was undoubtedly 'Shocking' in 1959,but,incredibly its just as shocking in the modern era,for the opposite reasons.This album is full of racism,sexual exploitation, misogyny,upon a raft of politically incorrect fakery.A Beatsploitation masterpiece.
Rod would do vitually anything to sell records,and believe me he had around 6 or 7 albums out every year for at least a decade and a half....and this wasn't the only Beatsploiting platter in his truly horrible, but vast, canon.The public were frightened,so Rod's main job was primarily turning the Beat scene into a joke,just as 'they' did with Hippies and Punks in the coming decade.Even Rod did a Psychsploitation album ten years hence.He never managed a punk album,praise be to his masters Gods.Although, his single,the B-side to novelty smash 'The Mummy', "Beat Generation",as backed by no less than, Bill Haley and his Comets(!) is a beatsploitation masterpiece,Which is in effect, where Richard Hell got his "Blank Generation" song from....so maybe by default Rod even got in on the Punksploitation market too.That is some kind of genius.It also explains where Hell got the idea of sweaters with holes in,messy hair,and writing shit poetry from?A deadly mixture of Bowie and Beatnik was our silly Richard."Like....er...LOL baby!"
So called 'Beat poet', WS Burroughs, like to write about control systems, but like later 'fads',Beatnik was just another insideous male instigated control system,to cajole women into bed.Which ,apart from war, is the only reason Men do anything.
"...Hey baby!Wanna come and ball at my crazy pad,I dig chicks who swing,y'get me?"..."Wow! Krazy Pops!"...Beat girls were far too 'Kool' to simply say...'oh fuck off you creep!'
"Wow! Krazy Pops!"

I still remember this excerpt from the back of one of those albums:
We created our own french postcards
We made love, and only the sea was watching...

I had no idea he was considered scary or edgy.

OK, but McKuen was gay.

Appreciate the comments. Makes a lot if sense..