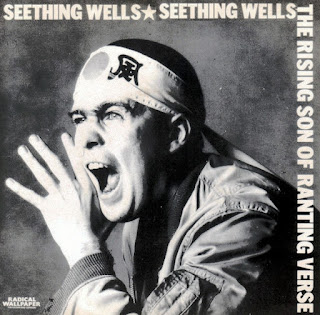 One would turn up at the pub to witness some shite punk metal hybrid version of the Alarm in 1982,and there would always be some scruffy herbert with notebook in hand,army surplus trousers, washed out Subhumans t-shirt,john lennon glasses and dirty basball boots, standing on the stage adressing the mike stand.
This Herbert, would invariably be a local 'Ranter', ready to pump out his politically charged monologues at 107 miles per hour to a mildy disinterested audience of approximately 18 fans of that shite punk metal hybrid version of the Alarm that we all really came to see. The sound of one hand clapping would perforate the silence as the obviously shy politics student he really is indulges in his poetry delivery as a kind of aversion therapy.He'll grow out of it,one thought,and by in large, they all did by 1985.
But.....Seething Wells,aka Steven,aka Susan, wasn't like that.This monobrowed skinhead was not just eloquent he was rather amusing too.So we can forgive any leftie leanings.Not that he waved his political stance like a baseball bat in the hands of a serbian in albania, unlike every other 'ranter' who were as subtle as the Blitz.
Political correctness was not a part of his set either, as satirised in "He/She's Perfect".He's from Yorkshire, but I don't think he likes anyone else from 'god's own country',as they like to refer to this shithole with rolling green hills and dales.
But sometimes this attitude can come back and bite you on the bum,as in "I Hate You, Edwina Curry/Gary Bushell",in which he wishes they die of cancer.Sadly Steven died of Lymphoma,and Edwina Bushell still live on!

DOWNLOAD to give birth to beautiful baby boy called susan HERE!
Posted by Jonny Zchivago at 00:39

If only for the song... Casual Sex With a Mutant Killer Sloth.

Thanks,I was hoping we were gonna get some Swells on this ranting trip

Can we get the Little Brother half of the Ranting verse album as well please ?

@ unknown indeed the killer sloth one is a jolly old wheeze...i played that on me radio show the other month.

& preceded the Beastie's use of the throat clearing by 2 years. wonder if thats where they got it?

Dang! Is this best website ever? Maybe, maybe not. But it's close.

Hmmmmmm, i'll go for the best ever option....because I can!
Cheers, Anon.

I remember this stuff when they played snippets on an NZ weekly punk show on Campus Radio circa 85... not SW but faves were Tommy Toilet Humour & one that finished something like 'a knock on the door, a gang of youths... any money grandad, giz it here & quick. A punch to the face, I fall to the floor, an epitaph, so that's what it's like to be young again...